Ronin is a selfish, yet skilled and intelligent mercenary. Based in Stiix with his airship R.E.X., he is hired often by Master Chen for heinous tasks such as capturing Zane and releasing the banished master from the Cursed Realm.

Up until the destruction of the Obsidian Glaive, Ronin was a memory thief known to remove people's memories and replace them with lies about their past.

Ronin is mercenary, and at one point, stole the Obsidian Glaive from Hibiki.

Shortly after the defeat of The Overlord, Ronin captured the newly rebuilt Zane and sold him to Master Chen for use as bait to lure the other Ninja into the Tournament of Elements.

Following Chen's banishment to the Cursed Realm, Ronin planned to free him using the Elemental Forges in return for a large amount of money that he could use to pay his debts. Knowing that the Ninja would no doubt interfere with his plans, he sent several of his warriors to the monastery atop Spinjago where they enlisted as Dareth's adult class to get close to the Ninja.

After his men were easily defeated by the Ninja, Ronin himself arrived in stolen samurai armor and lured the Ninja to the top of the mountain, destroying the village as he went. When the Ninja cornered him, Ronin used the Obsidian Glaive to remove their memories, yet was only able to erase a few years before Wu fended him off. The memory thief claimed that he had done what he came for and escaped in R.E.X..

To make sure that the Ninja wouldn't regain their memories, Ronin sent his forces to Kryptarium Prison to steal the map to the Inky Lemonberry from Hibiki. They were unable to obtain it before the Ninja arrived however, though by then, Ronin had used the Obsidian Glaive on the Serpentine to make them believe they were still at war with the Ninja. He sent the Constrictai to claim the Obsidian Scythe, but they failed.

Ronin and his forces attacked the Ninja again at the Fire Temple while they were obtaining the Obsidian Sword. Ronin himself arrived at the temple in a large mech just as the Ninja were leaving, but the mech, however, proved to be no match for the power of the Ninja. Ronin was forced to retreat again in R.E.X., but not before he activated a device that would cause the volcano to erupt. The ninja just barely managed to escape in time.

While the Ninja journeyed to the Frozen Wasteland, Ronin constructed a new power source for the Nindroids, and used them to attack Ninjago City as a diversion to buy him time to find the Lightning Forge. He returned to the Floating Ruins just as the Ninja deactivated the power source, and used the forge to attack them, this forcing the Ninja to flee.

Ronin sent his goons after the Forge of Fire while he himself found the Forge of Earth. He then went to the vault of Ice only to find the Ninja there with both the Fire and Ice forges. Ronin ambushed them with the Lightning Forge, though, Dareth and Zane managed to escape. Ronin caught up to them, however and threatened to bury the rest of the Ninja and Wu in dirt unless they hand over the Fire and Ice forges. Dareth countered by attacking Ronin with the two forges, unintentionally creating water, which when Ronin added lighting, shocked and discombobulated the Brown Ninja. Ronin grabbed the remaining Forges and left, his intentions now set on finding the Primal Fulcrum.

Ronin used the Obsidian Glaive to alter Misako's memory to believe that the Ninja had betrayed her. He then sent her to the Fangpyre Tomb to find any clues to the Fulcrum's location. A Samurai that had been secretly watching her reported back to Ronin that the Fulcrum was hidden in Hiroshi's Labyrinth, and Ronin journeyed there to find it.

When he entered the inner chamber where the Fulcrum was kept, Ronin found the Ninja trapped as Misako had tricked them into activating a fail-safe. Misako ran to him, relieved that he was there and expressed that she hoped she did a good job in trapping them. Lloyd however, became furious at what Ronin had done to his mother, and managed to break one of his arms free. He fired a green beam at the Obsidian Glaive, destroying it. With his key weapon no more, and its effect starting to wear off on Misako, Ronin mocked the Ninja before he left with the Fulcrum. To ensure he wouldn't be followed, he destroyed the entrance to the room.

Ronin then traveled to Chen's Island to finish his plans, but the Ninja manage to break free in time and traveled to the Island to stop him. Ronin then gave the orders to his troops to throw everything they had at them.

After the Ninja find Ronin in Chen's Palace, he had already manage to put up a force field around himself and the Fulcrum, as he began to place the Elemental Forges on the Fulcrum. Wu then pleaded him to stop but Ronin refused, placing the final Forge on the Fulcrum and opening a portal to the Cursed Realms.

But the Ninja did not stop and instead, entered the now giant sized portal on their Elemental Dragons and the Ultra Dragon to stop him once and for all. After they had searched different portals to find him and manage to build an entrance to the portal he was hiding in, they were finely standing face to face with Ronin for one last time, but Ronin then revealed a triumph card. Using the remaining power of the Elemental Forges, Ronin conjured a giant elemental mech and fought the Ninja. But as the battle continued, the Ninja managed to destroy each of the Forges that powered his elemental mech, until they where all destroyed, and Ronin was then forced to flee on R.E.X. once more, but not before he saw a giant, green, ghostly arm (possibly Soul Archer's arm) coming out of the now closing portal, Ronin then managed to escape.

Ronin's distinctive armor was, like most of his possessions, gained through dishonest means. It was forged by Eboshi, one of Ninjago’s greatest and most noble armorers, who Ronin tricked into helping him by implanting false memories with the Obsidian Glaive. After Eboshi created the armor for Ronin, he once more used the Obsidian Glaive, this time to wipe all of Eboshi’s memories so that he could never reveal Ronin’s identity.

Ronin's costume uses a half-mask similar to the Ninjas' Techno Robes and Tournament outfits, as well as a straw hat similar to Master Wu's.

He only wears a cape in the Shadow of Ronin advertisement art.

Ronin is a self-centered greedy character, willing to cause chaos and destruction, just so that he could get paid. He shows little, if any, compassion to his victims, and cares little for his own henchmen, seeing them as nothing but tools to further his own plans. He often cracks jokes and mocked the Ninja throughout their encounters, which also showed him as being full of himself. But he was no fool, he was shown to always stay one step ahead of the Ninja and his foes.

Ronin wields two katanas and the Obsidian Glaive, which allows him to steal and alter memories. He also uses different weapons and gadgets: like a grapling hook, various explosives like explosive shurikens, a giant mech suit, and R.E.X.. For a short time, Ronin possessed the Elemental Forges, which allowed him to use the elements of Fire, Ice, Earth and Lightning. This also allowed him to change into a giant elemental form of each element, during his final battle with the Ninja. Ronin also had his own personal army, of samurai armor wearing individuals. 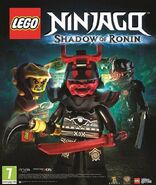 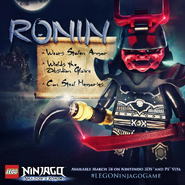 An advertisement with some info about Ronin. 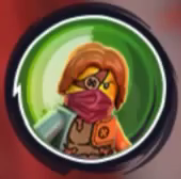 Zane's memory of his capture by Ronin

Ronin stealing the memories of the Ninja

Ronin (not shown, the Lightning Forge in his hand)

Ronin with both the Earth Forge and Lightning Forge in hand

Ronin, with all of the Elemental Forges.

Ronin in front of R.E.X.

Ronin leaves the alternate dimension in R.E.X.
Add a photo to this gallery
Retrieved from "https://ninjago.fandom.com/wiki/Ronin_(Shadow_of_Ronin)?oldid=320316"
Community content is available under CC-BY-SA unless otherwise noted.