Ninjago Wiki
Register
Don't have an account?
Sign In
Advertisement
in: 2015, Vehicles, Shadow of Ronin,
and 12 more
English

This article is about vehicle. You may be looking for the set.

“Karlof used to be aeronautical engineer back in Metalonia. Work on Roto Jets. Just one could take out entire army.”
— Karlof to Cole, "Spellbound"

Operational
The Roto Jet is a small bomber based on a type of attack plane created in Karlof's homeland, Metalonia. It was said to have enough firepower to take out an entire army. During the Tournament of Elements, the Elemental Masters, who were being forced to work in Chen's noodle factory, designed a "noodle-making machine," which was really a Roto Jet. The group used the jet to escape the factory, which would soon allow them to disrupt Chen's ceremony.

While brainstorming ideas to break themselves out of the noodle factory, Karlof mentioned how he used to work on Roto Jets and suggested they build one out of machine parts. Although Cole was skeptical about how a jet would be any use underground, the other prisoners agreed and began finding parts, while Karlof and Zane created a blueprint.

By the time the remaining Elemental Masters were taken to the noodle factory, the Roto Jet was nearly finished, constructed under the guise of it being a noodle machine. Jay began working on the vehicle as well and by the time Chen defeated the Green Ninja, the rotating barrel was operational. Upon receiving an large order of noodles for the banquet, Zugu decided to check on the "noodle maker," only to find the Roto Jet. Cole quickly hoped in and began firing at incoming cultists. With help from the other Elemental Masters pushing the jet, they managed to escape the factory.

After the Anacondrai cultists were transformed into fake Anacondrai, they departed from the island using Blade-Copters, while Chen stole the Roto Jet, leading his followers to Ninjago City to wreak havoc.

After the Anacondrai cultists captured Pythor and made the transformation spell permanent, they set off into Ninjago. As Chen taunted Pythor, he departed via the Roto Jet along with his army.

Beginning the Second Serpentine War, Chen flew the Roto Jet to Jamanakai Village where he observed his forces overtake the village.

Later, he had Eyezor, Zugu, Kapau, and Chope carry the Roto Jet into the Corridor of Elders, with Chen sitting inside of it. When the battle at the Corridor commenced, Chen flew the Roto Jet, eventually abandoning it as his army overwhelmed the Elemental Masters. As he stepped out of the cockpit, Chen was confronted by his daughter Skylor.

After the Anacondrai generals were freed from the Cursed Realm, they banished Chen and his army there. The status of the Roto Jet following the battle is unknown.

Cole used the Roto Jet to get from Ninjago City to the Storm Farms.

Soar into the sky with Cole flying this awesome Boulder Blaster ninja airplane! Fire the airplane’s 8 powerful spring-loaded shooters at the evil Eyezor on the ground below. Take aim at the prison to blast open the door to Lloyd’s cell. You must triumph in the skies of NINJAGO® City and then display the limited-edition golden Kai Legacy minifigure to celebrate 10 years of LEGO® NINJAGO sets.[2] 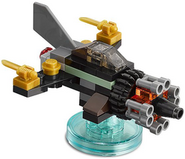