Ninjago Wiki
Register
Don't have an account?
Sign In
Advertisement
in: Ninjago, Ninjago: Masters of Spinjitzu, Characters,
and 10 more
English

This article is about the Royal Family of Shintaro. For other uses, see here.

Deven Mack (Vangelis)
Sabrina Pitre (Queen Vania)
The Royal Family is the imperial family of the Kingdom of Shintaro.

At some point after the Royal Family of Shintaro came into existence, Vangelis, the King of Shintaro, requested the Upply to come over to Kingdom and retrieve the Skull of Hazza D'ur. When the Upply returned with the skull, Vangelis kept it and sent the Upply to Rock-Bottom after they denied his intentions to use the skull for its powers.[1]

Sometime later, Vangelis took the Ivory and Shadow Blades of Deliverance from the Geckles and Munce and forced them to mine Vengestone for his customer.[2] As the customer paid Vangelis for the Vengestone, the latter kept the Kingdom of Shintaro and his secret from his people, including Vania.[3]

Years later, Vania convinced Vangelis to invite the ninja to Shintaro to celebrate her birthday.[4]

After the ninja and Wu were invited to Shintaro, Vangelis and Vania greeted themselves and let them stay at the palace. However, during the night, the Skull Sorcerer captured Cole when he went the Dungeons of Shintaro with Vania.[4]

During the ninja's time in the dungeons, Vania rescued Cole and they both returned to the Kingdom of Shintaro to warn Wu and Vangelis about the Skull Sorcerer. However, Vangelis revealed to them that he's the Skull Sorcerer and banishes Cole and Wu to Rock-Bottom. When Vania went to go after them, Vangelis warned her that he'll disown her she goes, but only for Vania to go.[3] As Vania tried to find a way back to the Kingdom of Shintaro with Cole, Wu, and the Upply, Vangelis lied to the Army of Shintaro about the ninja being traitors and later resurrected Grief-Bringer and had him and the Re-Awakened go after the remaining ninja and the Munce and Geckles.[5][6]

After he captured the ninja and the two tribes, he prepared to have the ninja executed in front of the Geckles and Munce, but was stopped by Cole and the Upply, who battled Vangelis to stop his tyranny in the Dungeons of Shintaro.[2] During the battle, Vangelis was close to beating Cole, but lost when Cole unlocked the Spinjitzu Burst and destroyed the Skull of Hazza D'ur. After Vangelis was dethroned, Vania was crowned queen of Shintaro.[7]

When Nya took the Storm Amulet from Kalmaar, Cole gave it to Vania so the Army of Shintaro could protect it. Unbeknownst to them, they were securing a replica of it.[8] After Nya sacrificed herself to defeat Wojira, Vania and the Army of Shintaro attended at her memorial.[9] 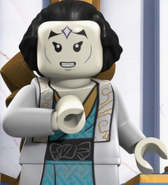