Ninjago Wiki
Register
Don't have an account?
Sign In
Advertisement
in: Sons of Garmadon, 2018, Locations,
and 7 more

View source
watch 01:54
Obi-Wan Finale - The Loop
Do you like this video?
Play Sound
“The palace is equipped with secret passages to get anywhere fast.”
— Hutchins, "The Mask of Deception"

Farewell the Sea (pictured)
The Royal Palace (also known as the Palace of Secrets) was the home of the Royal Family of Ninjago. It was destroyed by the Sons of Garmadon in the aftermath of their attack to steal the Oni Mask of Deception from the palace, though the Temple of Resurrection was left intact.

Sometime after the majority of the palace's destruction, the Temple of Resurrection was used by the Sons of Garmadon in order to bring back Garmadon. After Lord Garmadon's reign of terror was over, the ninja helped to restore and clean the palace.

The ninja are then shown around the palace by Hutchins, who shows them the Oni Mask of Deception's display case. Later that night, the ninja patrolled the palace grounds. Lloyd would check on Harumi, only to find her missing from her room.

Lloyd would later find Harumi, who was disguised at a stranger who helped the poor. The two would be found by Hutchins, who returned them to the palace.

The next day, the ninja would train in the palace grounds while giving Lloyd dating advice. Later that night however, Cole, while on patrol, would follow Hutchins to the underground vaults of the palace, where he discovered that the palace was rigged to explode with the use of Blast Sap. As Cole escapes and the Blast Sap goes off, it signals the Sons of Garmadon to move in, who proceed to assault and destroy the palace. During this, Mr. E would recover the Oni Mask of Deception, only for it to be destroyed by Kai. However, it is revealed it was a fake; Hutchins had secured the real mask from the vaults below. He then tasks Lloyd and Harumi with fleeing the palace with the mask while he finds the Emperor and Empress.

Unfortunately, the Sons of Garmadon would steal the mask from the two, who are forced to escape on the Destiny's Bounty. Lloyd would later pick up the other ninja, who escaped the palace. In the distance, the ruins of the Royal Palace can be seen as Harumi states that she is once again alone.

The ruins of the palace was used to construct the Temple of Resurrection by Harumi and the Sons of Garmadon.

Days after the Sons of Garmadon were arrested, the ninja were cleaning up the Royal Palace before Wu tells them of a situation, which turned out to be a ruse for them to attend a celebration. Later, Lloyd and Wu chat about Garmadon's warning on the rooftop while the Firstbourne is resting. 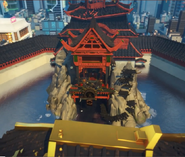 The ninja training at the Royal Palace's gardens.

Mr. E battling the ninja in the palace.

The Temple of Resurrection in the Royal Palace.

The ninja cleaning the palace in Hunted.

The ninja and their allies on the steps of the Royal Palace.
Community content is available under CC-BY-SA unless otherwise noted.
Advertisement