This article is about the artifact. You may be looking for the card.

“Long ago, there were many flutes, created to combat the powers of the Serpentine and drive them underground. But over time, Ninjago's forgotten its ancestors' wisdom, and now this is the only one.”
— Wu to Zane, "Snakebit"

Destroyed[2]
Sacred Flutes were legendary instruments in Ninjago, appearing as traditional wooden flutes. They are said to have power over the Serpentine, being capable of weakening them and negating some of their abilities.

After defeat in the Birchwood Forest, the Elemental Alliance withdrew to Jamanakai Village. Garmadon then noticed a villager playing the flute, manipulating his snake in a basket. This gave the son of First Spinjitzu Master the idea of how to end the war,[3] and the Alliance created several sacred flutes that were able to manipulate the Serpentine. With the help of these flutes, the Alliance managed to lock the Serpentine in five separate tombs. As the years went by, humans forgot about its ancestors' wisdom, and all the flutes were lost, except for one owned by Master Wu.[1]

By the time that the Serpentine were released by Lloyd, Master Wu had the only remaining Sacred Flute. He used it to cure Cole of Skales' hypnosis while the brainwashed ninja fought his comrades atop Lloyd's treehouse fortress. Upon hearing the music of the flute, Cole immediately snapped out of his trance and joined his allies in escaping the crumbling fortress. On the way back to the monastery, Wu explained the flute's significance to the ninja.

Master Wu brought the Sacred Flute with him when the ninja visited Ed & Edna's Scrap N Junk. It proved useful in stunning the Fangpyre forces occupying the junkyard, but Lloyd countered its effects by using a boom box infected with Fangpyre venom, playing loud music to drown out the sound of the flute.

When Cole and Zane investigated the Constrictai Tomb, they took the Sacred Flute with them. During their battle with Constrictai General Skalidor, they repeatedly attempted to use the flute, but Skalidor's powerful grip left them unable to finish the song. After several tries, Zane finally completed the melody, weakening Skalidor enough for the two ninja to defeat him.

Later, the ninja were lured into a trap in the Toxic Bogs, where they learned that all of the Serpentine had been unleashed. When Zane attempted to use the Sacred Flute against the massed Constrictai and Venomari, Pythor knocked the flute out of his hands and took it for himself. Master Wu was displeased to learn that the Serpentine now possessed the flute.

Pythor would eventually use the Sacred Flute against his fellow Generals in a bid to unite the tribes under his leadership. After letting Skales in on his plan, he challenged the Generals to a Slither Pit in the Lost City of Ouroboros, demanding their allegiance if he managed to defeat all four of them at once. When the battle turned against Pythor, Skales slipped him the Sacred Flute, and the scheming Anacondrai used it to incapacitate the other Generals. Both Pythor and Skales had put cotton balls in their ears prior to the battle, so they were not affected.

Zane was revealed to have a recording of the Sacred Flute, which the ninja used in the construction of the Ultra Sonic Raider. The vehicle's main armament was a pair of sonic cannons that played the Sacred Flute's melody at an amplified volume, which the ninja used against the Great Devourer. The monstrous snake proved as vulnerable to the music as the Serpentine had, but it managed to disable the Raider's sonic cannons with its tail before the ninja could completely pacify it. 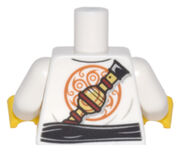 Sacred Flute on the back of Honor Wu's torso 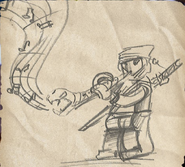 Wu putting the flute into the cabinet

Used by the unknown Elemental Master at the Anacondrai

Used by Maya at the Venomari

Used by Ray at the Anacondrai

Sacred Flute on Wu's back in "The Hands of Time"