Not to be confused with the Wu's Academy student.

“I'm gonna be a singer. I'm gonna be like, on the radio, and TV, and in concerts and stuff.”
— Sally, "The Benefit of Grief"

Ashleigh Ball
Sally is a singer-songwriter in Ninjago.

Sally was driving her father's van to Ninjago City when she came across Zane, Kai, and Dareth. Assuming they were strangers astray in the desert, she lets them in her van. During the trip, she plays one of her songs and tells the Ninja that she plans to go to Ninjago City and become a famous singer. After, Zane points out a picture she has in her car and she gets upset and let's go of the wheel. After being saved from a car crash by Zane, she later reveals that she actually ran away from home and is scared that her parents may not forgive her if she goes back home.

The police begin to trail behind her and the Ninja and worried that her dad had sent the police on her, she started the van and drove away only to find out that she was tricked and the police were after the ninja in the van. Regardless, she still helps the ninja escape by diving the van into a nearby canyon with a river at the bottom. After escaping, she was rather excited about the chase, though after her father's van breaks her cheerfulness turns sour quickly and she says she wished she could turn off her emotions so she could do anything with worry. Zane encourages her to go back home and with her new friends, she does and is embraced by her parents who forgive her. 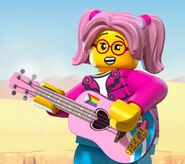