The Absolute Worst (first)
The Call of the Deep (second)

Jennifer Hayward (first)
Kelly Metzger (second)
The Samurai X Mech is a redesigned Samurai Mech used by P.I.X.A.L. as the new Samurai X. After the Preeminent returned to Ninjago, P.I.X.A.L. began to use an another version of the mech suit,[1] which is bulkier and far more powerful.

Along with the Samurai X suit and VXL, P.I.X.A.L. improved the original Samurai Mech by reinventing it after she became the new Samurai X.

P.I.X.A.L. used it when she was controlled by Harumi. Harumi and Lloyd used it to get off the Bounty. It crashed in the jungle.

Nya managed to find it and give it back to P.I.X.A.L. Later, P.I.X.A.L. uses it to fight the Sons of Garmadon but was defeated.

P.I.X.A.L. used it to get to the Ninjago police department.

P.I.X.A.L. tried to stop the Colossus with the Mech but was defeated.

P.I.X.A.L. used the Mech to train Lloyd while they hide from the Sons of Garmadon.

P.I.X.A.L. tried to stop Garmadon from crushing Nya, Lloyd, and Dareth with the Mech, but Garmadon used his power to blast it out of the sky, and later Killow pulled P.I.X.A.L. from the wreck.

When the ninja heard signals coming from NGTV, the others went to save the people there, but P.I.X.A.L. stayed behind in case Lloyd and Garmadon needed her help. She used the mech to fly above the cloud of darkness.

When Lloyd finally requested extraction from the corrupted Ninjago City, P.I.X.A.L flew the mech into the cloud of darkness, despite Lloyd expressing concern as to what it could do to her. However, P.I.X.A.L discovered that the mech's fuel had decreased due to waiting up in the sky for so long. P.I.X.A.L managed to use the mech to reach Lloyd and Garmadon and successfully flew it up the side of Borg Tower and out of the cloud, despite the fuel levels being on 1%. While attempting to close the distance between the Bounty and the mech, the mech ran out of fuel and began falling back towards the cloud of darkness. The Bounty appeared just in time to catch them as P.I.X.A.L crash-landed the mech onto the deck of the Bounty.

The mech was among one of the vehicles P.I.X.A.L. has in the hangar bay.

P.I.X.A.L. used the mech to fend off the Elemental Cobras attacking the city.

When P.I.X.A.L.'s radar went off, she used the mech to capture Ultra Violet, the Mechanic, and Fugi-Dove and brought them back to Kryptarium Prison.

P.I.X.A.L. goes on a mission with Zane in her second Samurai Mech. They are going to save the fishermen from their boat when they are attacked by an octopus. However, the mech is caught by the octopus' tentacle and it retracts P.I.X.A.L. even with her suit underwater, where there is a danger of destruction. However, she manages to save, because some time ago she decided to look into how to pressurize their vehicles for better depth deployment. When she flies above the surface, she and Zane return to the Monastery of Spinjitzu. 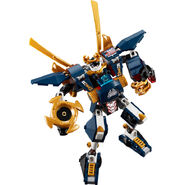