Saving Faith is the eighth episode of the ninth season of LEGO Ninjago: Masters of Spinjitzu, and the 92nd overall. It was released in the United States on August 25, 2018 as part of "Hunted: Part 3."

Lloyd and his team plot to take control of the Oni Titan. Meanwhile in the First Realm, the Ninja fall into Iron Baron's clutches and an old master returns.

The episode begins directly where the last episode ended, with Skylor "captured" and Mistaké posing as Harumi before the real Harumi shows up. The true Harumi unveils that the other is an Oni in disguise, to which Killow restrains her. Mistaké and Garmadon denounce one another, with Garmadon challenging her to show her true self. Mistaké then transforms into her true Oni form, and viciously fights Garmadon. A battle breaks out, with Skylor attempting to absorb Garmadon's element, which she eventually does after Mistaké creates a smokescreen to deceive Garmadon. Skylor leaps from the tower and onto a passing hot air balloon, while Garmadon kills Mistaké off-screen.

In the First Ream, Wu wants the Ninja to rescue Faith. He quotes his father, urging them to "have faith", and they head off despite their objections. They find her buried in the ground from her neck downwards. Wu approaches her, she tries to warn him by mumbling through her gag. Wu removes the gag, but quickly realize it's a trap, and are captured by the Dragon Hunters. As the hunters celebrate their victory, the Ninja banter to relieve the stress of the situation. Baron taunts Faith who reveals to the hunters that Iron Baron is only using them, she states he lied about the Oni and possibly killed his allies to get the Dragonbone Blade. Baron quells any growing rebellion, threatening his own forces, and electrocutes the Ninja and their allies. In doing so, Wu has an epiphany and suddenly regains all his memories, from his youth up to being lost to time. He breaks free and confronts the Dragon Hunters. Baron negotiates with Wu, claiming that if he finds the Dragon Armor—which can purportedly control the Firstbourne—he'll let them return to Ninjago. Wu agrees, and departs with Baron.

Skylor returns to The Resistance's base, where she informs the others that Mistaké didn't make it. They then realize the Sons of Garmadon followed her, and retreat to the rooftop. From there, Skylor uses Garmadon's element to try and control the Colossus. She eventually "succeeds", as it starts moving towards them, but realizes Garmadon is moving it. The two struggle for control of the behemoth, and at the last second Skylor stops it from destroying the building they're on. She turns it against Garmadon, fighting Killow and Ultra Violet and destroying the Oni Mask of Deception. The Colossus begins to scale Borg Tower, prompting Harumi to warn Garmadon of the impending threat; he refuses to leave, and Harumi flees.

Harumi escapes the tower and uses a zip line to reach a nearby building. While inside, the Colossus crashes into the building, rendering it unstable. She finds a family trying to flee, in a similar fashion to her family's separation during the attack of the Great Devourer. Feeling unbearable guilt, Harumi helps the family exit the building through a fire escape, but before she can leave herself, the exit is blocked by rubble. She urges the family to leave, and heads to the rooftop. Skylor stops struggling for control of the Colossus after Garmadon's element poisons her. Garmadon suddenly loses control, and the Colossus crashes into the building Harumi is on, making its collapse inevitable.

Harumi is horrified, but accepts that she can't save herself as she shares a look with Lloyd, who sadly watches her predicament. The building then collapses, with Harumi dying in the process. Garmadon cries out in fury and grief, before declaring that Lloyd can have Ninjago but in ruins. As Lloyd and Nya debate how to help Skylor, Dareth points out that the Colossus is on its way. 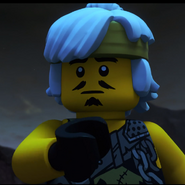 Wu's new look, with a mustache and a goatee

Harumi's last smile before she dies.

Garmadon trying to control the Colossus

Colossus about to smash the top of Borg Tower

"We must leave, it is not safe here"

Garmadon about to control the Colossus

Harumi is distracted by the cries of a child

Harumi sees a boy about to lose his parents

Harumi realizes what she has done

Harumi saves a boy and his parents

Harumi guides the family towards the exit

The mother thanks Harumi for saving her family

Harumi seconds before her death.

Add a photo to this gallery
Retrieved from "https://ninjago.fandom.com/wiki/Saving_Faith?oldid=373091"
Community content is available under CC-BY-SA unless otherwise noted.