Ninjago Wiki
Register
Don't have an account?
Sign In
Advertisement
in: Ninjago, Ninjago: Masters of Spinjitzu, Characters,
and 8 more
English

View source
watch 02:24
Wiki Targeted (Entertainment)
Do you like this video?
Play Sound
“
Everyone knows I am Scar the Skullbreaker. Now, who are you?
— Scar to Rocky Dangerbuff in "Iron & Stone"
„

Michael Adamthwaite
Scar the Skullbreaker (or simply Skullbreaker[1]) is a Dragon Hunter.

As Scar the "Skullbreaker" is anticipating for the fight between Kai, Jay, Zane, and Slab to commence, he is mistakenly bumped into by Cole in his "Rocky Dangerbuff" disguise. During this encounter with Cole, he reveals that he is known by everyone and that his full name is Scar the "Skullbreaker," implying that Skullbreaker is actually his nickname. It is also noted that he says "Dangerbuff" is a tribe within the Dragon Hunter's population, thus also revealing that they are split into tribes.

He drives one of the Hunter Trucks after the ninja. When Iron Baron jumps off the falling Destiny's Wing, he lands on Skullbreaker's truck. Skullbreaker then follows the ninja when they take the Dieselnaut. However, his truck is hit by a chain and sent swerving away.

He cheers when Wu declares that Iron Baron's rule is at an end and then watches the ninja leave the Realm of Oni and Dragons. 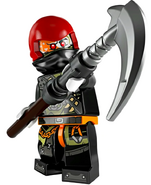 Scar's CGI with his erroneously-colored hood.

Scar's minifigure with his erroneously-colored hood.