School for Crooks is a Ninjago: Masters of Spinjitzu chapter book in the Brick Adventures series. It is the second in this series of books and was published July 31, 2018.

When Kai and his friend Skylor hear there's a new villain in town running a school for crooks, it's up to the ninja to teach those bad guys a lesson. Look out villains, you're about to get schooled![1]

At Chen's Noodle House, Kai receives a communication from Zane that a new criminal gang is recruiting members. Kai mentions this to Skylor, which reminds her of a recent encounter with a few guys in the restaurant who had mentioned the "School for Crooks." Though Kai was planning on investigating with Zane, Skylor convinces the Master of Fire to team up with her for old times' sake.

That evening, Skylor and Kai go to the docks, where they spot and gave chase to the cloaked figure who seems to be the leader of the criminal school. During the chase, Kai uses Airjitzu, a technique Skylor had not seen before, to bring himself and Skylor closer to the unknown individual.

The two finally corner the stranger, only for him to reveal himself as Ronin and explain that the "School for Crooks" is actually a criminal reform course. Ronin had signed on to this in a deal with the Police Commissioner to help clear his name. At the same time, reforming criminals would help stifle the actual criminal gang that Kai had heard was recruiting new members.

After explaining that he had simply fled from Kai and Skylor because he would get fewer students if it seemed that he was working with the ninja, Ronin bid the two farewell while mentioning his appreciation for the Noodle House's Puffy Potstickers.

Nya was on her way to the far north, searching for Wu along the way, but did not find him. She alerts Lloyd of her status before going back to her real quest. Rumors of a walled village ruled by a cruel master kept people working in the fields for long hours without rest. And Nya had come to put a stop to this madness.

As she approached the gate, a guard stopped her, demanding what of her presence. She tells him she's come to visit the Master but the guard refuses to let her in, telling her no visitors were allowed with the rule of "No one in, no one out." Nya questions him if that is so before darting past him and pushing him out, seemingly fulfilling the rule. She turns to continue on but a bigger guard blocks her and asks if there is a problem. He relays the same rule as Nya leaps up to pass him overhead but he punches her out of the gate instead.

Nya finally tells them she didn't want to do this but it seemed like they were going to have to fight and the guards burst into laughter at the thought of fighting a little girl. In response, she conjures up a ball of water and corrects them with the title, "Master of Water". The two guards then stop laughing and start whispering the things they heard about her, including her being a ninja, defeating The Preeminent with a single wave, and destroying the Cursed Realm for fun. While the last statement is not entirely true, Nya decides to let them think that to her advantage and demands they let her in. But the guards still insist on their rule so Nya shoots a burst of water at them. Unfortunately, the water fizzles out when it reached the gate and Nya realizes the gate is made of Vengestone. The guards are now laughing at her and when they defeat her, they slam the gates shut, repeating the same rule.

Frustrated that did not go as planned, Nya suddenly comes up with an idea to sneak in. Half and hour later, she comes back in a villager's outfit, carrying two buckets of water on her back. When asked, she tells the same guards she went out to get water. They become outraged, realizing she left the village under their watch and could get punished. Nya casually suggests they could let her back in so it looked like she never left. The guards hurriedly agree, demanding her to stay quiet and stick to her work, once Nya is past the gate. A smile crosses her face as she assures them she will and has her work cut out for her.

Lloyd is chasing an intruder on the rooftop, after discovering someone had ransacked Princess Harumi's bedroom. He calls out, demanding who they are, and the thief throws off their cloak, revealing it was Princess Harumi herself. Surprised that she was not kidnapped, he asks who's in the bag, to which Harumi corrects him with what's in the bag, and shows him food. Lloyd insists that her bedroom was ransacked and the princess blushes, stating that she could be very messy. Lloyd starts to apologize when they hear guards approaching. Harumi immediately tosses some clothes from a nearby laundry line at him for a disguise and they slide down a pole.

But when they're on the ground, they see more guards marching around and hide behind laundry. They hear the leader tell the guards to question everyone, under the Emperor and Empress's orders. At the moment, Harumi nervously tells Lloyd they'll realize who she is, if they speak to her, but Lloyd reassures her he'll get them both out of the situation somehow.

Just then, the lead guard sees them and marches over. Lloyd steps in front of Harumi and the guard asks if he's seen anyone hanging around the palace or any intruders going in or out. He denies to both questions. The rest of the guards then start complaining how this search was getting them nowhere and they wouldn't be needed on patrol if the ninja were just doing their job. Lloyd questions them what they mean and one of the guards states that the ninja are supposed to be protecting the palace but the royal family still has them on patrol. Another guard starts complaining how he thought all the ninja would be taller, especially the green one. At that remark, Lloyd blushes but then Harumi pokes him and they see a motorcycle leaning against a building. The lead guard then asks Harumi if she saw anything but Lloyd interrupts them, saying the ninja seemed pretty cool and asks which one they would be. The lead guard laughs and says none but they all start squabbling over which ninja they wanted to be. As their leader comes over to remind them they are royal guards, Lloyd and Harumi take off for the motorcycle and ride away before they notice they're gone.

Suddenly, the front tire blows and the motorcycle skids toward a cliff. Harumi then pushes Lloyd behind her and takes over the wheel, leaning into the skid and steering away from the cliff. They speed off to an alleyway, where Lloyd disbelievingly asks how she drove like a master. Harumi stammers she doesn't know and Lloyd claims it was incredible and thanks her for saving their lives. Harumi dismisses the compliment, saying they were lucky to have the ninja protecting the palace. Lloyd then laughs and states he should probably be the one asking for protection from her to which Harumi shyly replies she will do her best. 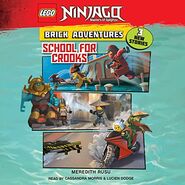