I'm trying, but I'm not the Master of Earth! It's not responding!

Intact (reforged)
The Scythe of Quakes is one of the four Golden Weapons used by the First Spinjitzu Master to create the realm of Ninjago. After forging the island, the weapons were passed onto his sons, Wu and Garmadon, who were to keep them safe. Yet when Garmadon was corrupted and tried to steal the weapons, Wu used the scythe and Shurikens of Ice to fight his brother, eventually condemning him to the Underworld. Afterward, Wu hid the Golden Weapons.

Many years later, Wu trained four ninja and sent them off to reclaim the weapons. Cole, the master of earth, claimed the scythe and defended the weapons from Lord Garmadon. When Samukai wielded all four Golden Weapons at once, he was disintegrated, creating a portal that allowed Garmadon to escape the Underworld. The ninja would wield the Golden Weapons in their battles against the Serpentine, but when they lent the weapons to Garmadon in a bid to kill the Great Devourer, he stole them and forged the Mega Weapon. The ninja altered the timeline and destroyed the weapon, sending its molten remnants into space, where they wound up on a star known as Arcturus.

The Golden Armor was stored away by Cyrus Borg for safekeeping, as Wu had done so many years earlier.

The Golden Armor is later taken by Lloyd and Garmadon, where it is given to Kai to meltdown and reforge the golden weapons. He succeeds, and the Scythe of Quakes is reforged, now sporting a slightly different appearance. It is briefly used by Nya against the Oni, but due to her element being water, she cannot harness its true power, but it is given to Cole soon afterward, where he is able to make full use of his new weapon. After allowing the Tornado of Creation to be used through their presence, it became powerless along with the other Golden Weapons.

Along with the other three Golden Weapons, the Scythe of Quakes was created by the First Spinjitzu Master using gold that came from the Golden Peaks and was forged in the Temple of Light and subsequently used to create Ninjago. It is unknown if it has any role in fighting the Overlord, but it possibly had a part in splitting Ninjago in two.

Soon after the First Spinjitzu Master's death, one of his sons, Garmadon, attempted to steal and use the power of the four weapons for his own selfish ends. Garmadon's younger brother, Wu, defeated him and caused him to be banished to the Underworld. Wu then took the weapons and hid them in different places throughout Ninjago. The Scythe was hidden in the Caves of Despair, where Wu placed the Earth Dragon to guard it.

Many years later, Wu's four ninja proteges, Kai, Cole, Zane, and Jay, rediscovered the Scythe. It was their first weapon gathered in their attempt to retrieve the four weapons from their hiding places and to keep out of the hands of Lord Garmadon. Although the ninja were charged not to use the Scythe, Kai used its power to provide them an escape route after the Earth Dragon woke up.

The ninja were later ambushed at the Fire Temple, and the Scythe, along with the Shurikens of Ice and the Nunchucks of Lightning, was stolen by Samukai. The weapons were then taken to the Underworld, where Samukai fought Wu with the three weapons he stole. During their battle, Samukai used the Scythe to shatter the ground they stood on. After Samukai defeated Wu, he took up the fourth weapon, the Sword of Fire, which Wu had been fighting with. The powers of the four weapons served to destroy Samukai and create a vortex through space and time, allowing Lord Garmadon to escape his Underworld prison.

In defense of Ninjago

After Lord Garmadon escaped, the four ninja took up the weapons to use them in defense of Ninjago. Each ninja took the weapon that matched their elemental properties, so the Scythe was in the possession of Cole. The Earth Dragon, nicknamed Rocky, guarded it by serving Cole as a mount and pet.

During a three-hour video gaming marathon with the other ninja, Cole carelessly left the Scythe of Quakes on the floor, though used it to plug the TV in after Wu unplugged it.

Cole brought the Scythe of Quakes along with him when the ninja journeyed to Jamanakai Village to stop Lord Garmadon, though didn't use it as the threat turned out to be the dark lord's son, Lloyd.

When the Hypnobrai attacked Jamanakai Village, Cole brought the Scythe with him and used it in the battle against the snakes.

Cole used the Scythe during training, though Zane briefly stole it to use in his own training.

Cole brought the Scythe with him to destroy Lloyd's treehouse fortress and used it to attack the ninja when he was turned against them by Skales.

After Rocky leaves for the Spirit Coves, Cole unlocks his weapon's ability to become a vehicle, the Tread Assault.

When Pythor unleashed the Great Devourer, the only way to stop it was to give Garmadon all four weapons so that he could use them at once in one final blow to the giant snake. It was a victory for the ninja, but at the cost of losing the weapons.

After this, Garmadon took the weapon to the Golden Peaks, where it was forged with the other three into the Mega Weapon, which was eventually destroyed by the same weapons used to create it in the past when Garmadon went back in time to stop Lloyd from becoming a ninja.

The Nindroids succeeded in getting the Weapons of Spinjitzu from Delta V and have burnt them into the Overlord's ultimate weapon. Later, the Golden Master started to destroy New Ninjago City with his newly formed mech—made out of the gold from the Weapons of Spinjitzu. However, the Nindroids were not the only ones to escape; the ninja have used their elemental shields, and have traveled out of space. The Golden Master gets frustrated and plans to defeat the ninja. He now performs his own Spinjitzu, trying to stop the ninja from going into the Temple of Fortitude. However, he fails. The Heroes of Ninjago put on armor to resist the Golden Power from him. He, somehow, grabs all the ninja except Zane. The White Ninja eventually destroys him and the Overlord weakening the power of the armor in the process.

Kai reforged the weapon and Nya held it until Cole returned to the Monastery of Spinjitzu. Nya was unable to use it because she was a Master of Water, not Earth. When Cole arrived, Nya gave it to him. It was rendered powerless following the Tornado of Creation.[1]

The Scythe of Quakes is strong enough to cut through stone. When its blade is planted in the ground, it can create earthquakes or fissures. It also formed Cole's Tread Assault.

This mighty weapon can mow down trees and move mountains. Whoever masters it can control the earth. Used by the First Spinjitzu Master to create Ninjago, it is one of the four Weapons of Spinjitzu.[link unavailable]

The "special" variant of the Scythe of Quakes, only found in 9455 Fangpyre Mech

Legacy Cole with the scythe

The Scythe of Quakes in Wu's Story

The Scythe of Quakes with the other Golden Weapons

Wu hiding the Scythe of Quakes in the Caves of Despair

Cole sleeping with the Scythe of Quakes next to him

Cole (right) wielding the Scythe of Quakes against Zane

The Scythe of Quakes transformed into the Tread Assault

The Scythe of Quakes reforged by Kai

The Scythe of Quakes being used by Nya

Nya, unable to use the Scythe of Quakes 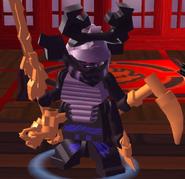 Lord Garmadon (Overlord) with the Scythe of Quakes in LEGO Ninjago: Shadow of Ronin 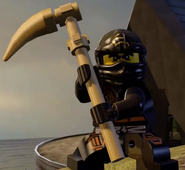 In LEGO Dimensions with Cole