The fourteenth season[1] of LEGO Ninjago is preceded by Season 13 and will be succeeded by Season 15. It will come out in the first half of 2021, the same year as the series' 10th anniversary.

At the moment, it is unknown which of the following statements refer to this season. Some of them may be in reference to unannounced future content: 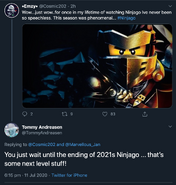 The LEGO Group's official reaction to the passing of Kirby Morrow[22] depicting Cole in his suit from this season.
Add a photo to this gallery

Retrieved from "https://ninjago.fandom.com/wiki/Season_14?oldid=551220"
Community content is available under CC-BY-SA unless otherwise noted.