Ninjago Wiki
Register
Don't have an account?
Sign In
Advertisement
in: Ninjago, Ninjago: Masters of Spinjitzu, 2022,
and 2 more
English

View source
watch 01:25
Jurassic World: Dominion Dominates Fandom Wikis - The Loop
Do you like this video?
Play Sound
“He wants you to know, he's assembling your enemies against you. Soon, they will strike, and all Ninjago will fall before his wrath.”
— The Kabuki Mask to Lloyd, "Ninjago City vs. Ninja"

The fifteenth season of Ninjago, subtitled Crystalized, is preceded by Season 14 and The Virtues of Spinjitzu, and succeeded by an unknown 2023 installment. Lloyd is the mascot character, while the focus character is unknown. The Crystal King serves as the main antagonist, and the Vengestone army serve as the villainous faction of the season.

A teaser for this season was released on the Portuguese channel SIC K on March 3, 2022, but was deleted soon after. The account associated with them on Instagram confirmed that this season will be premiering June 2022 in Portugal.[1][2][3]

A song from the tenth episode "The Benefit of Grief" called Inner Steel was released on music platforms on June 17th, 2022.

Can you rise to the challenge? Level up your skills on NINJAGO.com and tune into the upcoming season to learn more about these mysterious crystals.[7]

Teaser: The ninja are back for another season with brand new adventures in NINJAGO®: Crystalized! This time they have been locked up in Kryptarium Prison where they are surrounded by some of their old enemies.

Here they learn a mysterious Crystal King is recruiting a council of evil enemies. To find out the identity of this new enemy, they escape from prison and become fugitives.

Who is the Crystal King? Why is he gathering a powerful counsel? Get ready for another action-packed mission with the ninja![8]

Ninja on the run: The chase is on in a new season of NINJAGO® Crystalized!

The ninja are on the run and desperate to remain free to save NINJAGO® City! But who is chasing them? And can the ninja remain out of their clutches? Get ready to find out![9]

Vengestone Mystery: In the new season of NINJAGO Crystalized someone is moving large amounts of dangerous vengestone across the city. The ninja are on the case and their investigation brings them to an abandoned subway line but it seems to be a dead end – or is it?[10]

Ninja Vehicles: The ninja take to the road and the air for a secret mission in the new season of NINJAGO Crystalized.

The crew are really hyped about their awesome new rides that even have special paint to avoid identification. What is the mission? And can Cole, Zane and the rest of the crew remain undetected in these superfast vehicles?[11]

An invitation for revenge: In the new season of NINJAGO: Crystalized, mysterious crystal spiders break into Kryptarium Prison at night. What are they up to and who sent them?[12]

Trailer: Get ready for a wild adventure with a new season of NINJAGO Crystalized. Mysterious things are happening around Ninjago City but the ninja are determined to save it. The shadowy and mysterious Crystal King is creating a council, but why? The ninja must find out what is going on in NINJAGO city.

Ninja vs. The Mechanic: The ninja's hunt for the Mechanic leads them to a dangerous subway tunnel where a fight breaks out.

Lloyd was the mascot ninja and the Golden Weapons are the collectible items of the season. The set background was based on Ninjago City.

NINJAGO® Crystalized - Ninja on the run

NINJAGO Crystalized – An invitation for revenge!

NINJAGO Crystalized - Ninja vs. The Mechanic 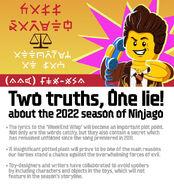 The description of the official poster