Not to be confused with the first episode of the season, the villain duo, or the activity book.

“Don't you get it? Things are already changing. For the worse. Besides, Master Wu also says "Never put off until tomorrow what can be done today." And if we don't help today, there won't be a tomorrow.”
— Kai to Nya, "Lost in Time"

The seventh season of Ninjago: Masters of Spinjitzu, subtitled The Hands of Time[1] (usually shortened to Hands of Time)[2][3][4] was preceded by Season 6 and "Day of the Departed" and succeeded by Season 8. Kai and Nya were the focus ninja and mascot characters, Acronix and Krux served as the main antagonists, and the Vermillion were the villainous faction of the season.

Shortly after the Day of the Departed, Master Wu awaits his old enemy Acronix to complete a battle they began 40 years ago. But Wu never should have faced such a powerful foe alone. Acronix hits Wu with the Time Punch, which causes him to start rapidly aging! Acronix escapes and reunites with his twin brother Krux, who has been living the past 40 years in disguise as the lovable Dr. Sander Saunders. During this time, Krux has been breeding a new slithering enemy: the Vermillion Warriors.[5]

Kai and Nya were the mascot ninjas, and the promotional art was appropriately focused on the Vermillion Swamps. The collectible items were the Time Blades. The sets mostly consisted of locations and Vermillion vehicles.

In the March of the Oni intro 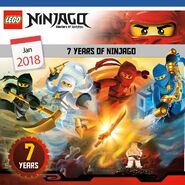 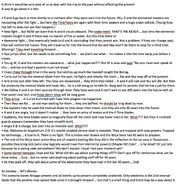 An unknown cancelled set from the wave.