Secret of The Wolf is the twenty-third episode of the eleventh season, and 121st overall of LEGO Ninjago. It aired in Malaysia on September 21, 2019. It aired in the US on January 4, 2020, paired up with "Krag's Lament."

The Ice Emperor summons an enormous ice behemoth to attack Lloyd and his faithful wolf companion.

Red and Lloyd using the Titan Mech, and Lloyd discuses the Sons of Garmadon much to Red’s dislike. When the storm begins to get worse, they pick up the pace in order to reach the Castle of Ice.

Meanwhile, Lloyd and Red continue to walk until they face the Ice Behemoth. Lloyd, in his Titan Mech, fights the Ice Robot, but both fall down a cliff. Red is able to wake up Lloyd, but it also revives the Ice Robot. Red tries to help, but she is kicked by the Ice Robot. Eventually, they reach a frozen lake where Lloyd cuts the ice open, causing the Ice Behemoth to fall through.

Lloyd comes to find Red unconscious, but still having a heartbeat. Lloyd sets a shelter and wraps a bandage around Red's leg before sleeping. The next day, Lloyd wakes up to find Akita in her human form. Shocked, Lloyd is upset with her and believes she deceived him. He then walks away from her and heads to the Castle of Ice, but Akita follows Lloyd. Once again, Lloyd is upset to see Akita and they both begin to argue. Lloyd then gallops off, and Akita tries to follow, but whimpers, due to her injured leg. Lloyd comes back and apologizes for being so harsh. She accepts the apology and plans to tell Lloyd her story.

At the Castle of Ice, the Ice Emperor awakens Boreal by striking his staff on the ground repeatedly, disturbing the prisoner, who looks out his cell window to see it fly off for the Great Lake. 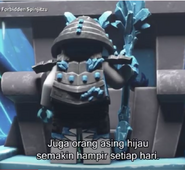 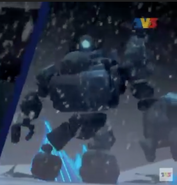 Add a photo to this gallery
Retrieved from "https://ninjago.fandom.com/wiki/Secret_of_The_Wolf?oldid=383259"
Community content is available under CC-BY-SA unless otherwise noted.