Were you looking for Cole's Earth Mech?

Security Mechs are vehicles from New Ninjago City. Cole used his Techno Blade to hack into one, turning it into his Earth Mech.

The Security Mechs were created by Borg Industries to aid the citizens of New Ninjago City, such as correcting traffic accidents like that which occurred with the bus from Master Wu's Academy. However, as with Borg's other creations, the Mechs fell under the control of the Digital Overlord after he was reawakened within the Digiverse. They thus surrounded the Ninja as they attempted to escape the city with the Techno Blades, only to be temporarily disabled by Lloyd's Golden Power. However, the energy ended up reactivating them, and the Ninja were forced to attempt to escape the city yet again. Using his Techno Blade, Cole was able to hack one of the Mechs, converting it into his Earth Mech.

The Overlord later had the Mechs who had absorbed Lloyd's energies brought to Cyrus Borg's lab in order to drain the Golden Power from them in hopes of creating a new body for himself; however, the trace amounts of energy proved insufficient for his purposes.

Security Mechs prepare to attack the Ninja at Borg Tower 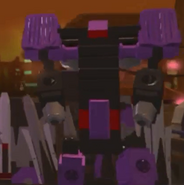 In Shadow of Ronin
Add a photo to this gallery
Retrieved from "https://ninjago.fandom.com/wiki/Security_Mech?oldid=284480"
Community content is available under CC-BY-SA unless otherwise noted.