Not to be confused with Clancee's mother.

“They have a right to know. If we're going to shed a new skin, we must open our home to others.”
— Selma to Skales, "The Curse of the Golden Master"

Jillian Michaels
Selma[1] is the member of the Hypnobrai tribe. She is the mother of Skales Jr. and the wife of Skales. She lives in the Serpentine village.

Selma was later among the Serpentine that were trapped in the tomb of the Stone Army. As the Serpentine resigned themselves to their new fate underground, they made the tomb their new home. Eventually, Selma married Skales and bore him a child, Skales Jr..

When the ninja confronted Skales outside their village in the Tomb of the Stone Army, Selma accepted them, persuading her husband to let them in so they could learn the Curse of the Golden Master. During the Nindroid attack, she attempted to protect her son, only for General Cryptor to trip the latter and mock him. When the ninja held off Cryptor, she was able to unite with her son and escort him to safety.

As a child, Clancee was briefly under the care of Selma, who hugged him and then watched with love as he rolled down the hall in his stroller.

Selma appears to be a Hypnobrai Soldier with pink scales and white markings on her head and body. She wears a small pearl necklace, has white arms and fangs.

Selma with her son, Skales Jr. 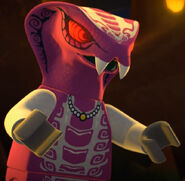 Selma and the ninja

Selma and her family

In "The Tall Tale of Clancee"