View source
watch 01:25
Jurassic World: Dominion Dominates Fandom Wikis - The Loop
Do you like this video?
Play Sound
“I hope this next fight is between you and me, because I'm gonna put you on your back.”
— Shade to Kai in "Spellbound"

Andrew Francis
Shade (sometimes known as Shadow) is the current Elemental Master of Shadow and was a competitor in Master Chen's Tournament of Elements. Shade lasted for most of the event until the Elemental Masters were stripped of their powers. He and the fighters rallied against Chen, who completed a spell that turned his army into fake Anacondrai. A new alliance of Elemental Masters rose up to fight Chen's army at the Corridor of Elders. As Shade and his allies were overwhelmed, Garmadon sacrificed himself to curse Chen's followers.

Months later, Nadakhan imprisoned Shade and the other Elemental Masters in the Djinn Blade. When Jay made his final wish, these events were erased and Shade was freed.

After the supposed demise of the original ninja, Lloyd recruited Shade and many others into a new team in a bid to resist and end Lord Garmadon's oppressive rule.

Shade was born as a descendant of the previous Elemental Master of Shadow. At some point, he unlocked his True Potential.[1]

When Kai was fighting Kruncha in the Slither Pit, Shade was also present in the Yang Tavern.

Later, Shade was present when the Elemental Masters gathered at the docks and boarded the ferry to Chen's Island.

Shade was present when Chen explained the rules that benefit the Tournament of Elements. He was also one of the few Elemental Masters to receive a Jadeblade, therefore allowing him to move up a rank and continue in the tournament

Shade watched the first round of battles, though he didn't participate himself.

Like the other competitors, he was against the ninja as a result of Chen taking their rooms away. In addition, he was part of Chamille's team and was one of its main members, along with Tox. The two were visibly shocked when Chamille was eliminated.

Shade was present with the other Elemental Masters while they were having a meal in the main hall of Chen's Palace. Chen congratulates him for his victory over Tox (an event that happened off screen), and tells everyone that whoever wins the Tournament will get to keep his staff—a lie he tells to destroy their discreet alliance. Lloyd attempts to explain that Chen wants to steal everyone's powers, but the other Elemental Masters believe he simply wants the staff for himself. After Nya approaches the group dressed as a kabuki, Lloyd looks over at Shade, firmly believing that he is the spy.

The remaining Elemental Masters gathered in Kai's room to check for Anacondrai tattoos on anyone's back, which would prove whether they're loyal to Chen or not. Shade was accused by Griffin Turner for being Chen's spy, as he appeared to be a very mysterious figure in the situation since he refused to prove that he didn't have any tattoos on his body. While the Elemental Masters were checking each others' backs for tattoos, Shade escaped the room, telling the ninja that he's not the spy, nor is he their friend and declares his intention of gaining the Staff of Elements.

Still at odds with the ninja, Shade boarded a blimp with the other fighters for the next round of the tournament. As the aircraft ascended, Shade expressed hope that the next fight was between him and Kai after the latter continued to accuse him of being a spy. He listened to Chen talk about the next match, in which the group had to hunt for Nya.

Shortly after, the bottom of the aircraft opened up, causing the Elemental Masters to plummet down towards the island with many parachute packs as well. Shade was the first to be able to grab one of the provided parachutes.

A little time later Shade landed safely. Once he was on the ground, he started to look for Nya and soon found a bow and arrow left in the forest by Chen as a gift to help in the search. However, the bow was embedded with a tracking device.

While searching through the woods, Shade was soon cornered by Clouse and several Anacondrai warriors, who told him that his time in the Tournament was up. Shade then realized too late that the ninja were correct about Chen all along as confirmed by Clouse and Shade was captured by the Cultists, being placed in a cell made of Vengestone.

He soon witnessed one by one as the other Masters (except Lloyd and Skylor who was the spy) were captured by Chen and his forces. Shade was seen looking down at the recently captured Kai with a sad expression on his face as he knew the fate Chen had in store for them.

Shade and the other hostages were brought before Chen. While doing so, Shade and Griffin Turner lamented on the fact that they didn't heed the ninja's warning or how they should have noticed Chen was evil in the first place; before they had their powers taken from them. Along with the others (except Kai), Shade was put to work in the noodle factory, where he joined the other defeated Masters in constructing a Roto Jet to escape.

Eventually, they were successful in its completion and used it to break through the swarms of guards and Clouse's serpent before using it to it disrupt Chen's spell. In the chaos, Kai destroys Chen's staff, thereby returning the elements to their respective Master and allowing them to overpower the guards while Chen and a few of his forces escape.

With Chen in hiding and a majority of forces captured, the Elemental Masters gain control of the island while awaiting Chen's next move.

The Elemental fighters subdued Chen's forces and when Garmadon arrived asking about Kai and Skylor, Shade stated they were on their way. Shortly, Garmadon's tattoo started to glow and he transformed into an Anacondrai which caused all those gathered to realize that Chen completed the spell. The assembled group realized Chen's followers transformed as well and rushed to fight them but they were overwhelmed by the newly strengthen enemy forcing them to retreat. The Elemental masters watched as Chen's army headed off to invade Ninjago and they couldn't pursue due to being stranded. As they lament the situation, Zane and Kai (with Skylor) arrived riding Elemental Dragons stating they faced their fear which helped them unlocked this power. This caused the elemental masters to realize they had this ability to unlock it as well and proceed to create elemental dragons with Shade creating his own Elemental Dragon. He along with the other masters then travel back to Ninjago and stop Chen from taking over the island.

Returning to New Ninjago City with the others, they discovered that Chen has yet to invade. Shade was then sent by Lloyd with the Elemental Masters to protect the people.

He was shown to have taken leadership when he was contacted by Nya, commanding the masters to follow and stop the trucks. Like the others, he found out it was all a trick by Chen to separate them and invade without any problems. Shade realized this and lost control of his dragon out of fear.

Having been sent a mental message by Neuro—through Lloyd—Shade regrouped with the other Masters at the Samurai X Cave, where they are told Chen and his army will journey through the Corridor of Elders to reach Ninjago. Shade was complex at the location as Wu told him it was where the monuments where their ancestors rested and where they resolved to defeat Chen and his army.

During the battle of the Corridor of Elders, Shade hijacked one of the Blade Copters, using it to assist in the fight against the Anacondrai Cultists. Following the Cultists' banishment to the Cursed Realm by the souls of the released Anacondrai Generals, he proceeded to celebrate the victory. He is later seen with the other Elemental Masters, making amends with the ninja and promising to help them in the future. He soon goes to help Karlof clean up the wreckage left behind from the battle.

At some point, Nadakhan imprisoned Shade in the Djinn Blade with the other Elemental Masters.[2]

He, Karlof, and Griffin help Lloyd, Nya, Misako, Dareth, and P.I.X.A.L. when they were surrounded by the Sons of Garmadon before guiding them to Skylor.

When he first appeared, he flirts with Nya by calling her gorgeous.

Shade greeted the Resistance when they made it to the garbage depot.

The Resistance watched as Lloyd lead Dareth in a fight against Karlof. When Karlof won, Lloyd suggests they make a plan.

They made their way into Borg Tower. When they see Garmadon nearby, Skylor copied Shade's Shadow and Mr. Pale's Light to hide them. When Garmadon and Harumi left, they continued their mission.

When the Sons of Garmadon attacked the garbage depot, the Resistance fought them. They were eventually taken to Kryptarium Prison.

Shade was captured by the Sons of Garmadon and was placed inside Kryptarium Prison.

The Resistance gained back the confidence they needed to escape the prison after they hear the stranded ninja were back. They broke out of their cell and helped save Ninjago. The citizens of Ninjago held a party to celebrate their victory.

Shade has a gray completion with combed black hair and wears mainly black and silver. He wears black gloves and a sleeveless black vest with silver shoulder braces, a silver wolf symbol with red eyes, and in front of a blue area on the chest. His legs are designed with gray pants and black boots. In Season 9, he now wears a gray armored vest, retaining the wolf symbol on the front, but without the blue area.

Shade is a lone wolf who does not trust anyone. He has the ability to travel in and out of shadows. Living most of his life in dark places has jaded him and made him wary to trust others. He is a skilled fighter, basing his attacks on surprise and unless you see him coming, you will never know what hit you.[3]

Possible appearance at the Yang Tavern 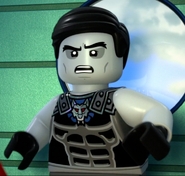 In the blimp arguing with Kai.

Shade and the other Elemental Masters in the Samurai X Cave

Shade with several members of The Resistance.

Shade and Neuro hide behind a car. 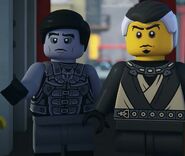