Destroyed
The Shadow Army, also known as the Army of Shadows, was an evil force of shadows created or summoned by Clouse using the power of Dark Matter to prevent the ninja from interfering with his plan to corrupt the Temple of Light. Fighting alongside the Sky Pirates, the Shadow Army proved vulnerable to Lloyd's powers but overwhelmed the ninja through sheer numbers. However, when Wu unveiled the Golden Mech and broke through Clouse's Shadow barrier, Clouse recalled the army and reformed them into his own dark copy of the mech. This Shadow Mech clashed with the Golden Mech but was ultimately defeated, allowing Wu to renew the powers of the Temple. 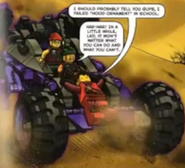