You may be looking for the set. For other uses of Ice Dragon, see here.

Guardian of the Shurikens of Ice (formerly)

Deceased
Shard was the Ice Dragon guardian of the Shurikens of Ice and Zane's pet.

After merging with the other three dragons, Shard was eventually caught by the Dragon Hunters and killed so his skeletal remains could be used as the throne for Iron Baron.[1]

Years ago, Shard was placed in the Ice Temple by Master Wu to guard the Shurikens of Ice.[2]

When the ninja arrived at the Frozen Wasteland, they discovered the Shurikens of Ice, guarded by Shard. They took the Shurikens but Zane was frozen in the process. They slid out, running from him, and hit an ice column, where the ice surrounding Zane was broken.

After Nya and Kai escaped the Fire Temple, Shard, along with the other dragons, was brought and ridden by Zane into the Underworld.

At some point, dragon pens were carved into the mountain underneath the Monastery of Spinjitzu and Shard began living there under the care of the ninja.

When the ninja learned that Lord Garmadon had apparently returned, Zane mounted Shard and flew him to Jamanakai Village, racing the other ninja along the way. After the threat had been discovered to be merely Lloyd Garmadon, Zane flew him back to the monastery. When the Hypnobrai attacked the village later in the day, Zane once again rode on him as transport there.

Zane ordered Shard to put out the fire that burned down the Monastery of Spinjitzu.

Shard and the other dragons left the ninja to fly to the Spirit Coves to begin their transformation into the Ultra Dragon.

Like all dragons, Shard lives in both Ninjago and the Underworld. Its breath weapon is Ice. It lives in cold climates. In its LEGO set, it is the smallest dragon. It only has three wing blades for each arm and no saddle. 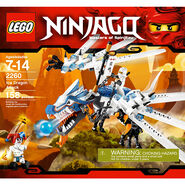 . . . then awakening to find Zane frozen.

The Ice Dragon on the card Sonic Roar.