Intact
Shurikens are basic throwing weapons used in Ninjago, primarily used by ninja. Also called throwing stars, they resemble metallic discs with three sharp points and a hole in the middle to decrease their weight. The shurikens are also large to be used in close combats. Although they can be used in melee, their small size makes them impractical in close combat.

Zane initially specializes in the use of shurikens, including the Shurikens of Ice.

Zane wielding a shuriken in an illustration by J. Jesús Fernández

A bunch of shurikens in the weapons rack 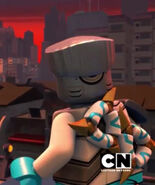