View source
watch 01:36
We're Getting Mutants in the MCU - The Loop
Do you like this video?
Play Sound
“Give me your Shurikens of Ice!”
— Garmadon to Zane, "Never Trust a Snake"

Intact (reforged)
The Shurikens of Ice are one of the four Golden Weapons used to create the realm of Ninjago, and formerly used by Zane.

The Shurikens were first used by First Spinjitzu Master along with the other three Golden Weapons to create Ninjago.

When the First Spinjitzu Master died, he entrusted the weapons to his two sons, Garmadon and Wu. Garmadon wanted power for himself and attempted to take them. Wu defeated him and banished him to the Underworld. Wu then hid the four weapons, including the Shurikens.

When Master Wu's four ninja proteges, Kai, Cole, Jay, and Zane were looking for the weapons to keep them from Lord Garmadon, they came upon the Shurikens in the Ice Temple. Zane was lifted to them by the other three ninja, as they were suspended from the ceiling. They then used a frozen Zane as a sled to escape from the Ice Dragon guardian.

Later, in Forest of Tranquility, the ninja were ambushed by Samukai, who stole the three weapons they had found so far, including the Shurikens. He then took them to the Underworld to confront Master Wu and gain the Sword of Fire. Samukai used the Shurikens to freeze the Sword in the ground, making Wu an easy target. After he defeated Master Wu, Samukai picked up the sword, intending to use all four weapons to rebel and defeat Lord Garmadon in an attempt to commit treason. However, the weapons' powers were too great for him, and he disappeared in a puff of smoke. The weapons made a vortex through time and space, which Garmadon used to escape. Zane then picked up the Shurikens to defend Ninjago from any future plans that Lord Garmadon may have.

In Defense of Ninjago

After Lord Garmadon escaped the Underworld, the four ninja took up the weapons in order to defend Ninjago. Each ninja took the weapon corresponding to their element, so the Shurikens were in possession of Zane. The Ice Dragon, Shard, guarded them by becoming Zane's mount and pet.

The Nindroids succeed getting the Weapons of Spinjitzu and have burnt them into the Overlord's ultimate weapon. Later, the Golden Master starts to destroy New Ninjago City with his newly formed mech—made out of the gold from the Weapons of Spinjitzu. However, the Nindroids were not the only ones to escape; the ninja have used their elemental shields, and have traveled out of space. The Golden Master gets frustrated and plans to defeat the ninja. He now performs his own Spinjitzu, trying to stop the ninja from going into the Temple of Fortitude. He, however, fails. The heroes of Ninjago put on armor to resist the Golden Power from him. He, somehow, grabs all the ninja except Zane. The White Ninja eventually destroys himself and the Overlord.

Kai reforged it and gave it to Zane who used it in the battle against the Oni. It was rendered powerless following the Tornado of Creation.[1]

The Shurikens of Ice were able to freeze anything on contact and shoot ice beams. They were also able to form Zane's Snowmobile when the White Ninja focused his thoughts.

The Shurikens of Ice also return back to Zane after being thrown, similar to a boomerang.

Filled with the biting power of a snowstorm, these icy throwing stars cut through the air, and chill to the bone. Master them, and this powerful Weapon of Spinjitzu will always come back to your hand.

A favorite weapon of Zane – Ninja of Ice![link unavailable] 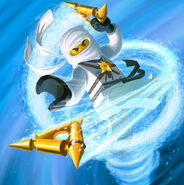 Legacy Zane with the shurikens 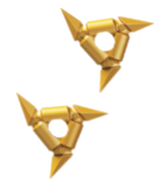 The Shurikens of Ice in the 2011 sets

The Shurikens of Ice in Wu's story

The Shurikens of Ice with the other Golden Weapons

Zane sleeping with the Shurikens of Ice in front of him

The Shurikens transformed into the Snowmobile

One Shuriken of Ice in Garmadon's possession in the March of the Oni opening.

The Shurikens reforged by Kai and given back by Zane.

As the snowmobile in LEGO Ninjago: Shadow of Ronin. 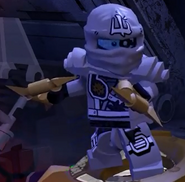 In LEGO Dimensions with Zane.