“Keep it down! There's a creepy evil guy with wings in that temple, and trust me, you do not want to meet him.”
— Cole to the ninja in "The Worst Rescue Ever"

The Skull Sorcerer enters the mines using the door of the Skull Keep.

The ninja are shown being forced to work there before escaping. When escaping, Cole and Lloyd went inside the Skull Keep and finds a lot of Vengestone and in the main lair, the Skull of Hazza D'ur. It summons the Skull Sorcerer, who tries to attack them with the skull. Cole and Lloyd eventually escaped from the lair and back into the mines.

Cole and the Skull Sorcerer continue to fight each other near the Skull Keep. At some point, Cole unlocks the Spinjitzu Burst and destroys the Skull of Hazza D'ur. After the fight, Vangelis is taken away by his former guards.

Team up with Hero Cole, Hero Zane and Hero Lloyd as they take on the Skull Sorcerer at his dangerous dungeons! Watch out for the dungeons’ many traps and the evil army of fighters: Murt, Ginkle and an Awakened Warrior. You must avoid all of this to seize the Shadow Blade of Deliverance and rescue a ninja from the prison cell. Only you can save the day![1]

Base of the Skull

The Skull Sorcerer runs his Vengestone mine from below the royal palace. Vania and the ninja must dodge its dungeons and brave its skull-shaped inner sanctum if they want to win.[2] 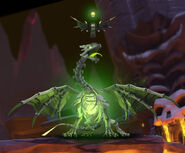 The Skull Keep in the background of a promotional poster for "Master of the Mountain". 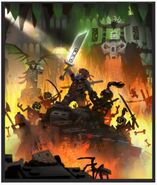 A room in the Skull Keep filled with Vengestone.