Not be confused with Captain Soto's pirate crew.

“Before you met me, you were all nothing. I granted your wishes, I took you in, I made you the most feared pirates that have ever roamed the seas.”
— Nadakhan to the Sky Pirates, "The Last Resort"

The Sky Pirates are a crew of diverse goons that were brought together by their captain, Nadakhan, many years ago. Unlike many other villainous factions in Ninjago, the group contains an extremely wide variety of warriors, ranging from all sorts of sizes and looks. Initially seeking gold and profit, the Sky Pirates' intentions are changed to vengeance against the ninja and the reconstruction of Djinjago and domination of the skies.

Long ago, the Sky Pirates were marooned across the Sixteen Realms by Captain Soto, who also imprisoned Nadakhan in the Teapot of Tyrahn. After Clouse freed Nadakhan many years later, the deceptive Djinn reunited his crew and found out his home realm was collapsing. As a result, he sought vengeance of the ninja, trapping all of them in the Djinn Blade except Jay and Nya. Nadakhan tried marrying Nya to obtain infinite wishes, while Jay formed a rag-tag team to raid Djinjago.

The Sky Pirates fought against the ninja and their allies, cooperating with Nadakhan up until the wedding ceremony when his full ferocity was unveiled. Nadakhan turned against his crew, banishing several Sky Pirates to other realms, while Flintlocke and Dogshank helped the ninja weaken him with the Tiger Widow's venom. However, the venom also got on Nya, and she died. Jay then made his final wish, that Clouse never found the teapot—Nadakhan granted Jay's wish, undoing recent events and sending the Sky Pirates back to their respective realms.

Despite this initial defeat, however, the Sky Pirates would quickly be called into action once more by the very events of Jay's wish, ironically; with Clouse unable to retrieve the Teapot of Tyrahn in the reset timeline, the sorcerer instead traveled to the Dark Island as an alternate source to restore his magic. Rejuvenated by the sinister energies, Clouse was able to summon the Sky Pirates from their realms, and threatening to banish them again, forced them into his service, having them kidnap fishermen on the Endless Sea under the cover of storms to use as a slave force mining Dark Matter. Participating in these kidnappings, the Sky Pirates' exploits in helping Clouse retrieve the substance needed to corrupt the Temple of Light eventually attracted the attention of the ninja once more. After the battle, the Sky Pirates were all sent to Kryptarium Prison.

Formed under the command of Nadakhan, their captain, the Sky Pirate crew was originally made up of several castaways. Most of its members had wishes granted by their captain, all with arguably disastrous results, save for Clancee, the only member not to have wished for anything.[1]

Sailing aboard their ship, the Misfortune's Keep, the pirates became the most feared crew in all of Ninjago, until they came into conflict with Captain Soto and his Destiny's Bounty crew. In their battle, Soto ultimately trapped their captain in the Teapot of Tyrahn and defeated the rest of the crew, going on to split them up and trap its various members amongst realms, and placing their ship in Gypsy Cove.[2][3]

The Sky Pirates' captain, Nadakhan, is ultimately freed from the Teapot of Tyrahn by Clouse, the latter seeking to regain his Magic and get vengeance on the ninja. However, Nadakhan easily tricks Clouse into wishing himself inside the Teapot, and goes on to learn the whereabouts of his crew, desiring to use the Realm Crystal to reunite them.

With the Realm Crystal, Nadakhan reunites Flintlocke, Clancee, Dogshank, Doubloon, and Monkey Wretch, and regaining his ship, declares that his crew has now become obsolete, with the age of pirates now over. However, upon visiting Djinjago to accompany their captain, the Sky Pirates witness the realm's destruction and return to Ninjago with the Djinn Blade, now given a new purpose and plans.

With the Misfortune's Keep converted into an airship, Nadakhan uses the Realm Crystal to reunite the rest of the lesser crew members and leads an attack on New Ninjago City. After wreaking destruction, they succeed in trapping Kai within the Djinn Blade and leave.

In order to cement the loyalty of his crew, Nadakhan unveils the reconstructed Djinjago to them, promising that it will be theirs, much to their unanimous celebration. Afterward, a few of their number are sent to stop the ninja from getting the Tiger Widow's venom, and they succeed in taking Jay prisoner.

As they participate in constructing Djinjago, several pirates defend their home base using newly-constructed vehicles such as the Sky Sharks and Raid Zeppelins from trespassers. While keeping Jay prisoner, the Sky Pirates subject him to countless torturous events in order to break him so that he'll 'wish it all away', some of their methods including a brutal game of Scrap and Tap and constant, never-ending labor. In an attempt to rally them to his cause, Jay tries to convince them that their captain is merely using them, and though they seem to support him at first, it turns out to be a ruse to crush Jay.

The Sky Pirates gain two new members in the form of Colin and Landon, who are renamed Bucko and Sqiffy by Nadakhan. The Sky Pirates afterward manage to capture Cole, Nya, and Lloyd, only to come into conflict with them aboard the Misfortune's Keep. After Cole's wish results in several of them falling off of the airship, they continue to fight on the clouds. They finally trap Cole and Lloyd in the Djinn Blade, prompting them to take their leave; save Flintlocke, who is sent after Jay and Nya.

The Sky Pirates lead an attack on the police department from above, behind the cover of the clouds. After destroying all of the police cars, they succeed in capturing the Police Commissioner and continue their search for Jay and Nya. Flintlocke, confronting Nadakhan over his intentions, attempts to lead a mutiny, but fails and is demoted. After Clancee uses one of his wishes to locate the duo, the Sky Pirates lead an attack on Lighthouse Island and finally succeed in capturing Nya.

While preparing for the wedding, the Sky Pirates send Bucko and Sqiffy to spy on Jay and his allies. Though Sqiffy is arrested, Bucko succeeds in warning the rest of the crew of the incoming intruders and they patrol Djinjago, attempting to track down Jay and his team. After Jay gets the Djinn Blade, they attempt to attack him and the others, only for the trapped ninja to emerge and defeat them.

Several Sky Pirates attempt to delay the ninja long enough for the wedding to commence, and ultimately succeed. However, Jay and Flintlocke's suspicions are confirmed when Nadakhan ruthlessly banishes Clancee, Monkey Wretch, and Doubloon. Though Flintlocke and Dogshank lead an attack on their captain, now betrayed, the remaining Sky Pirates fight them off, unaware of Nadakhan's treachery.

After defeating the rest of the crew, Jay uses his final wish to erase most of the events of the season. As a result, Bucko and Sqiffy are no longer part of the crew and are now regular citizens, and the Sky Pirates are once more scattered across the Sixteen Realms while their captain is trapped in the Teapot of Tyrahn, without memory of what happened.

Their resumed imprisonment wouldn't last, however, when Clouse, having lost the Teapot of Tyrahn at Stiix, used the energies of the Island of Darkness to restore his magic. Summoned from their realms by the ghostly sorcerer and reunited, the Sky Pirates displayed their gratitude, but also a desire to go their own paths and have new, reformed lives. However, their wishes were quickly crushed when Clouse revealed his ability to return them back to their realms, and with no choice, were forced to serve him.

Under Clouse's orders, the Sky Pirates began raids on fishermen on the Endless Sea, using the cover of storms to kidnap the sailors and force them into labor on the Dark Island, mining the corruptive substance known as Dark Matter in order to corrupt the Temple of Light and eventually destroy its defenses, turning the source of light-dark and thus dooming the world to evil. Likewise, Monkey Wretch resumed the production of vehicles, creating vehicles powered by Dark Matter, such as the Titanium Ninja Tumbler, Ultra Stealth Raider, Raider Bikes, and Rock Roaders.

With Misako and Ronin, having investigated and discovered their plans, the Sky Pirates succeeded in catching up to the two and kidnapping them on their way back to Ninjago, losing Ronin to the waves in the battle. Forcing Misako into labor in the mines of Digger's Deep, they continued their plot until the ninja, having noticed the disappearance, came to investigate. Finding conflict at Shadow's Bay from Jay, Nya, Ronin, and an unexpected Leviathan, Flintlocke, Doubloon, and a few other Sky Pirates retreated to Digger's Deep, where the rest of the crew was located and mining Dark Matter. Finding additional opposition from Cole and Zane, the Sky Pirates were ordered by Flintlocke to retreat to the Temple of Light and assist Clouse from there.

Transporting the final trove of Dark Matter to the Temple of Light and guided by Clouse, they faced initial resistance from the regrouped ninja, with the exception of Master Wu, but succeeded in ultimately escaping with the help of Clouse's magic and adding the final trove to the Temple of Light. With darkness consuming the sacred structure and drawing both continents of Ninjago together to corrupt it, the Sky Pirates were tasked by Clouse with defending his plans from the incoming ninja alongside his army of Shadows. However, when Master Wu used the Golden Mech to defeat Clouse and cleanse the area of Dark Matter, the Sky Pirates were quickly defeated and sent to Kryptarium Prison for their crimes. 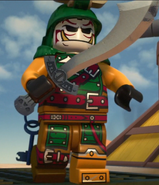 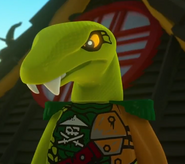 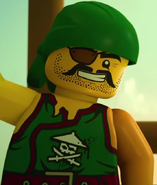 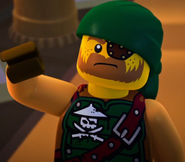 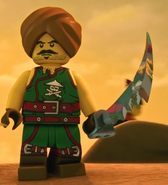 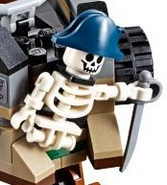 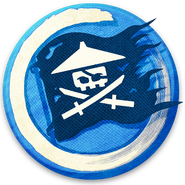