The Slither Pit is a Serpentine event. In line with the snakes' warlike culture, the Slither Pit has two or more Serpentine fighting each other in a gladiatorial-style arena. The events are used as a means of settling disputes, determining Serpentine leadership, and general celebration or entertainment. There are no rules beyond what the ringleader decides, and many arenas have lever-activated devices that can make battles more interesting and add more possibilities and outcomes to battles.

The Hypnobrai Tomb's Slither Pits were conducted in a large section of the first floor largely devoid of icicles and other obstacles. The arena was only loosely connected to the surrounding floor by unknown mechanisms, leaving a small gap around the edge. The referee observed matches from atop an icy ledge ringed by a low wall dotted with spikes, giving it the appearance of a toothy lower jaw. There were no other seats or bleachers, leaving spectators to stand around the edges of the arena. An icy archway was present on one side of the arena, acting as a formal entrance-way for combatants.

A pair of levers present on the referee's ledge activated different effects in the arena. One lever allowed for the raising and lowering of a rack of weapons suspended over the arena. The other—identified as the "Sidewinder"—caused the arena to tilt back and forth, possibly shaking the combatants' footing.

The Lost City of Ouroboros had a larger, more elaborate Slither Pit arena than the one seen in the Hypnobrai Tomb. Resembling an ancient Colosseum or a modern sports stadium, it had several gates and entrances through which spectators and combatants alike could access the arena. It also featured a number of bleachers around its edge, with enough room to seat the entire Serpentine army.

The arena floor displayed a large, slightly raised spiral made of rocks, and it was overseen by a large statue of The Great Devourer, which was thought to be imprisoned in the city. The statue had a staircase built into its back, allowing access to a platform within its mouth. Its four main fangs had holes carved into them where the Fangblades could be placed. The statue was flanked by smaller snake statues which leaked streams of venom from their mouths.

Like the Hypnobrai Tomb's arena, the Ouroboros Slither Pit had several gimmicks built-in, which could be activated with the use of levers at the foot of the Devourer's statue. One lever caused spikes to emerge from the spiral design on the arena's floor, while the other caused it to tilt from side to side.

When the Serpentine built an underground fortress to conceal their movements from the Ninja, they built a Slither Pit arena at the very bottom. It lacked seats or even a defined referee position, with match overseers positioning themselves near the gimmick-activating lever instead. Unlike other Slither Pit arenas, it appeared to feature a speaker system, which projected the referee's voice when they spoke into a microphone. A small acid pool was present at the center of the arena, featuring a pedestal that bore a golden statuette with slots for the Fangblades.

The fortress' Slither Pit arena had a single lever. When pulled, a ring of symbols spun around the outer edge of the arena, and whichever symbol was highlighted determined the change to the arena for that match. The only one shown was the "Vat of Venom," where the arena floor retracted to expose a series of narrow walkways over a pool of acid.

Besides Serpentine, the Yang Tavern arena is often used by Skulkin and humans. Due to a lack of referee position, they stand inside the arena to observe matches. The spectators are seated in one of the tables and can be served juice similar to the appearance of Snogfruit Punch.

It is possible that the slither pit was built in the other tombs, but it is unknown.

The first Slither Pit was seen in the Hypnobrai Tomb, when Skales dueled Slithraa for the Hypnobrai Staff and leadership of the Hypnobrai tribe. Mezmo was the ringleader for this match; during the bout, he briefly lowered a rack of weapons for the combatants to choose from and tilted the arena to shake their footing. After a fierce fight, Skales's mastery of Fang Kwon Do allowed him to overcome Slithraa, earning the staff and the position of Hypnobrai General.

After finding the Lost City of Ouroboros, Pythor summoned the four tribes to the city's massive Slither Pit. The Anacondrai challenged the other Serpentine Generals—Acidicus, Fangtom, Skales, and Skalidor—to a four-on-one fight, intent on forcibly uniting the Serpentine by claiming all five Serpentine Staffs.

Unbeknownst to Acidicus, Fangtom, Skalidor, and the other Serpentine, Pythor had convinced Skales to help him unite the tribes, promising to make the Hypnobrai General into his lieutenant when the job was done. To this end, Skales covertly slipped the Sacred Flute to Pythor when it seemed that the latter was being overwhelmed, and its music allowed Pythor to bring the Generals down - both Pythor and Skales stuffed cotton balls into their ears to negate the flute's effects, although Skales pretended to be affected as the rest of the Generals were. With his opponents incapacitated, Pythor easily took their staffs and declared himself the supreme ruler of the Serpentine.

Later, the Serpentine used Ouroboros's Slither Pit to pit the Ninja against Samurai X, only for the latter to help them all escape. Pythor attempted to stop the mysterious samurai with the arena's traps - including a tilting floor and retractable spikes - but Samurai X used his jetpack to dodge the traps and warriors while retrieving the Ninja's Golden Weapons.

A Slither Pit was built into the underground fortress the Serpentine were using to avoid detection by the Ninja. After collecting the Four Silver Fangblades and capturing the Ninja, Pythor wanted to return to Ouroboros immediately and awaken the Great Devourer, but the Serpentine were feeling overworked after the long hunt. At the suggestion of Skales, Pythor allowed the tribes to celebrate their imminent victory with a night of Slither Pit battles.

While the Serpentine were occupied with the fights below, the Ninja attempted to escape their prison, only to be thwarted by Pythor. Soon after, Lloyd arrived to help, shortly followed by Lord Garmadon and an army of Skulkin. As a battle erupted between the snakes and the skeletons, Pythor attempted to drop the Ninja into the Vat of Venom beneath the Slither Pit, only for Lloyd to free them.

The Serpentine were watching a Slither Pit match in the Ouroboros arena when Lord Garmadon arrived in a Rattlecopter.

After the Ninja split up after Zane's death, Kai, as the Red Shogun, went to Yang Tavern to participate in a Slither Pit. There, he easily defeated Kruncha with the help of his Spinjitzu.

Skales victory in the slither pit.

Mezmo at the ringleader's position.

The weapons rack in the Hypnobrai Slither Pit.

The Slither Pit arena at Ouroboros. 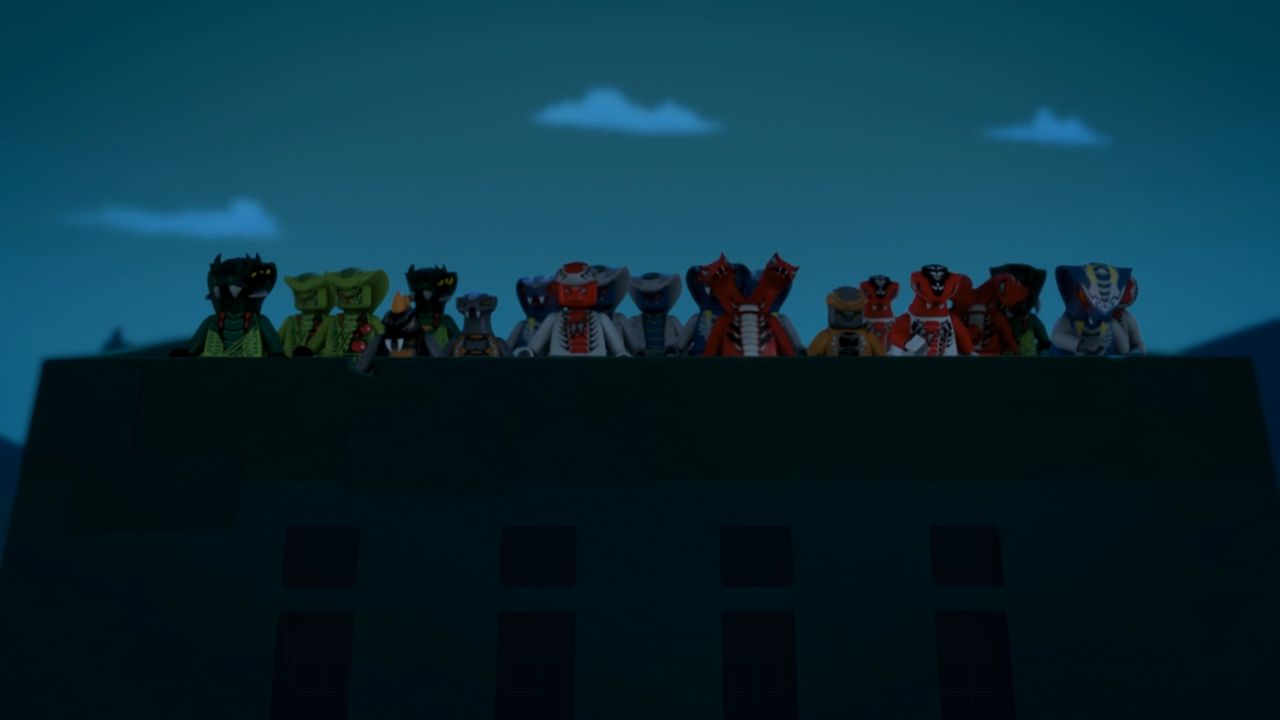 The bleachers of the Ouroboros Slither Pit. 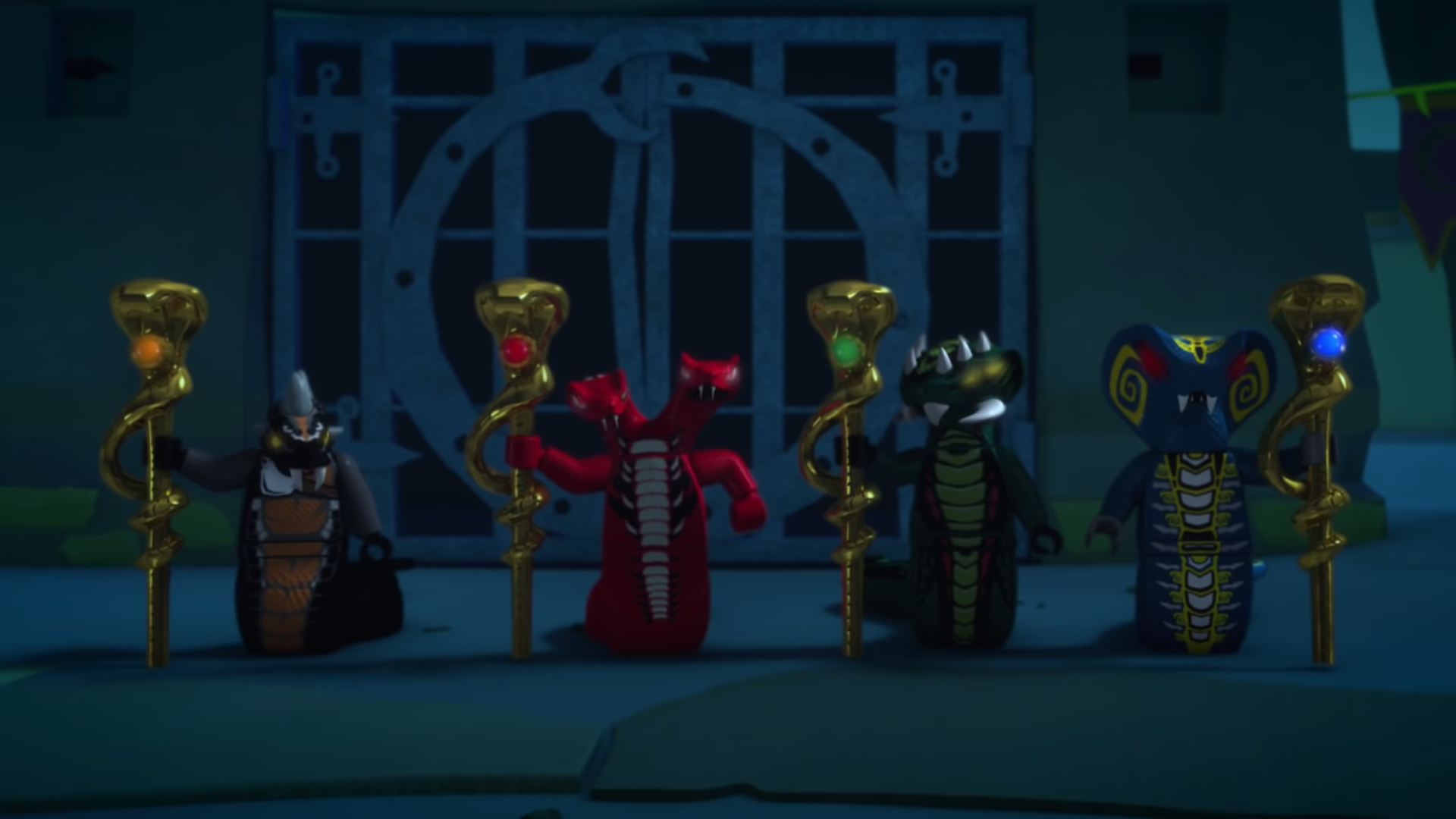 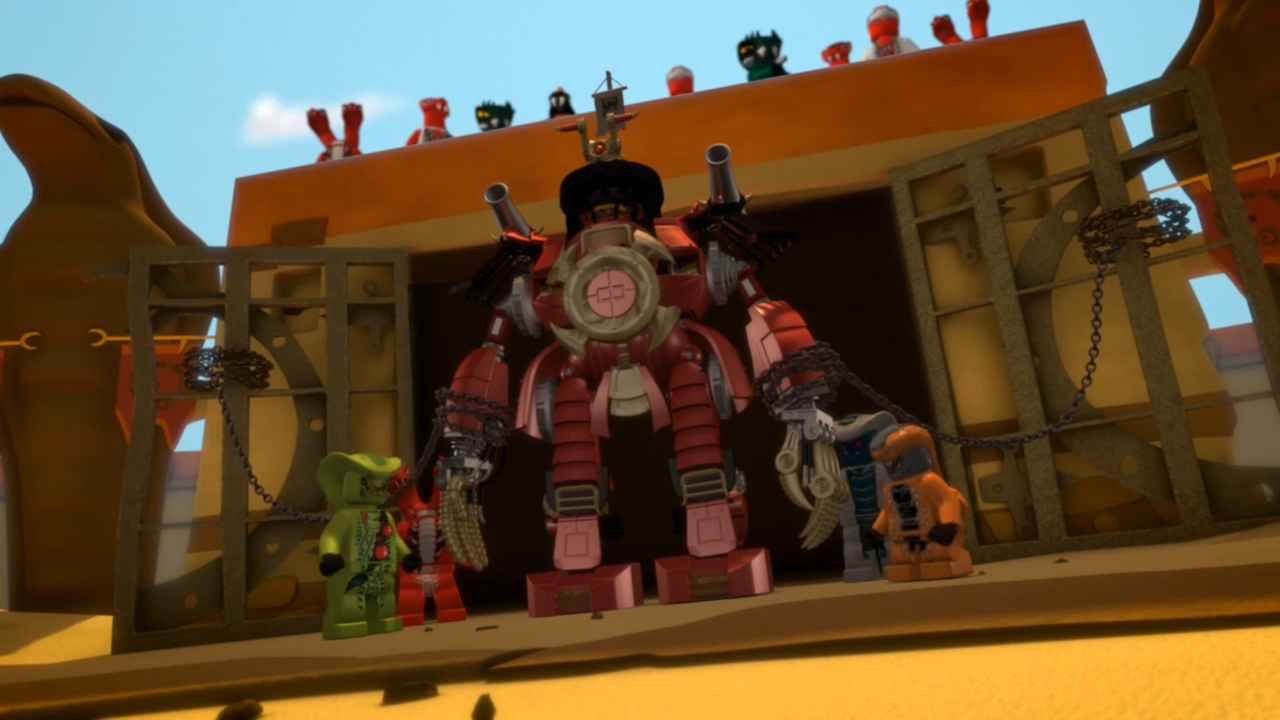 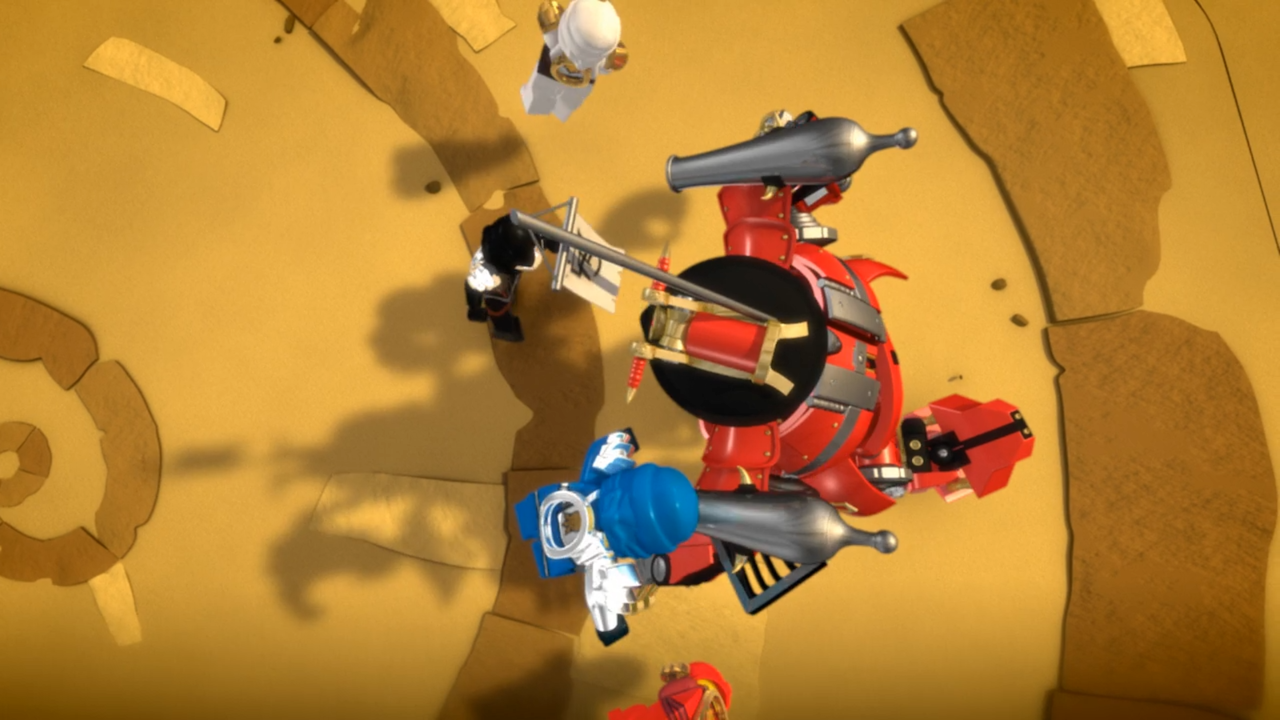 The Ninja battle the Samurai Mech in Ouroboros' Slither Pit.

The statue of the Great Devourer at the front of the Ouroboros Slither Pit arena.

The Ouroboros Slither Pit arena, with spikes and tilting features deployed.
Add a photo to this gallery
Retrieved from "https://ninjago.fandom.com/wiki/Slither_Pit?oldid=477288"
Community content is available under CC-BY-SA unless otherwise noted.