Alive
Snickers is a poodle that lives in Ninjago City.

During the strong earthquakes affecting Ninjago City, Snickers' owner tried to run to her pet, who was running around in the destruction and jumped on a nearby red truck. The ground then fell down before her, but luckily the ninja came just in time to help. Snickers watched as the ninja formed a chain to her owner, whimpering to Cole. The ground fell beneath them again, but Snickers, even before the ninja, jumped out of the way in time. Her owner was rescued by the team and Snickers jumped into her arms. While Wu, Misako, and the ninja discussed the earthquakes, Snickers' owner stood near the hole she was rescued from, holding the poodle. 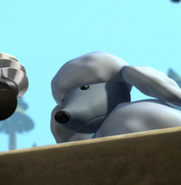 Snickers next to Cole, worried, looking at her owner. 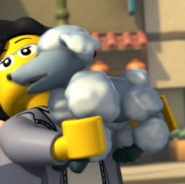 Snickers with her owner.
Add a photo to this gallery
Retrieved from "https://ninjago.fandom.com/wiki/Snickers?oldid=607113"
Community content is available under CC-BY-SA unless otherwise noted.