Ninjago Wiki
Register
Don't have an account?
Sign In
Advertisement
in: Ninjago, Ninjago: Masters of Spinjitzu, Ghost Warriors,
and 12 more

View source
“Run, run, run away. My arrow will find you anyway.”
— Soul Archer to Ronin, "Stiix and Stones"

Unknown
The bow was a weapon utilized by Soul Archer following his release from the Cursed Realm. He would use the weapon on many occasions, often using it to attack the Ninja. Upon the Preeminent's destruction, the bow was presumably destroyed along with Soul Archer.

When confronting Nya and Ronin at the Samurai X Cave, Soul Archer used his bow to attack Nya, but was stopped by Ronin's Aeroblade. When the two later escape, Soul Archer and the other ghost generals stop them, and the Soul Archer attempts to shoot a Skreemer at them but are forced to retreat when it begins to rain.

Soul Archer uses his bow to fire a Skreemer which homes on Jay, but it eventually hits a nearby log.

Soul Archer is seen wielding his bow when Ronin arrives to give Morro the Sword of Sanctuary.

Soul Archer uses his bow to fire an arrow to "ghost" the Destiny's Bounty, but Nya creates a tidal wave to destroy it.

Soul Archer threatens to fire an arrow at the "Green Ninja" as "he" is captured by Morro, Wrayth and Ghoultar. Soul Archer is later seen using his bow to attack Kai, but is able to escape thanks to the help of his headband.

As Kai falls into water at one point during the Preeminent's invasion, Soul Archer tactically waits to fire an arrow at him the moment he comes out of the water for oxygen, but Kai and Zane use their combined powers to defeat Soul Archer. After Nya unlocks her True Potential and drowns the Preeminent, Soul Archer is also destroyed upon this impact, and his bow was also presumably lost too. 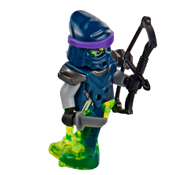 Soul Archer with a bow and knife in set form

Soul Archer with his bow in a promotional poster for Possession from Cartoon Network Africa.

Soul Archer wielding his Bow in the Possession mural. 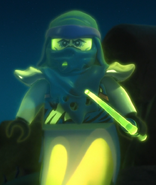 About to shoot Ronin.