View source
watch 01:33
Wiki Targeted (Entertainment)
Do you like this video?
Play Sound
“
Ninjago will see something they have never seen before. But in order for that to happen, I need more souls.
— Nadakhan to the Sky Pirates in "Enkrypted"
„ 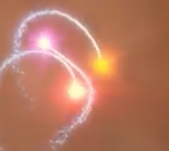 Clouse's, Wu's, and Misako's souls moving from the Teapot of Tyrahn to the Djinn Blade.

Kai's soul being captured by the Djinn Blade.

The ninja being freed from the blade by Jay.