View source
watch 01:25
Jurassic World: Dominion Dominates Fandom Wikis - The Loop
Do you like this video?
Play Sound
“It's a powerful force. Only an Elemental Master surrounded by his Element can achieve it. It's mentioned in some of the earliest teachings of Spinjitzu.”
— Master Wu to Cole, Vania, and the Upply, "Masters Never Quit"

Used
The Spinjitzu Burst (also referred to as simply the Burst) is a powerful form of Spinjitzu. The teaching is known only to Elemental Masters of Earth but can be used by any Elemental Master when surrounded by their Elemental Powers.

Several years before Master of the Mountain

At some point in time, the Spinjitzu Burst became to existance by becoming a martial art that would allow an Elemental Master to preform a powerful form of Spinjitzu by being surrounded by their Elemental Power.[1] However, as time passed, the way how the martial art can be used began to be only known by Earth Elementals.[2] Years later, Lilly visited Shintaro Mountain and learned the Spinjitzu Burst, and she used this power to destroy Grief-Bringer and freed the Geckles and Munce from terror.[3]

At the Heart of the Mountain, Wu reconized that the temple contained the teachings of the Spinjitzu Burst and explained the martial art to the others, saying that it can used by any Elemental Masters while its teachings were only known to Earth Elementals. Cole soon discovered that his mother performed the Burst to defeat Grief-Bringer.

After hearing this, Vania suggested to Cole that he should used the Spinjitzu Burst to defeat Vangelis and free the Munce and Geckles. Cole, however, doubted his mother even performing the Burst, saying that the Blades of Deliverance could've been the reason why she won her battle with Grief-Bringer. After Wu noted that the Spinjitzu Burst is the only option, the Earth Ninja tried to do it but failed, ending up doing normal Spinjitzu instead.

While Cole was being blasted by the Skull of Hazza D'ur, he remembered the promise he made to his mother to stand up for what is right. This allowed Cole to finally unlock the Spinjitzu Burst. The Skull Sorcerer was shocked and threw the skull at Cole to stop him, but Cole used the Burst to suck in the skull instead and destroy it, causing the Re-Awakened and Grief-Bringer to revert back to bones and Vangelis lose the source of his Dark Magic. 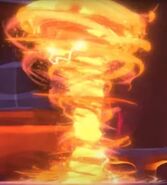