Blackdot
Spinjitzu Smash! is the first in a series of Web Games based on the LEGO Ninjago theme. The player has to defeat waves of enemies to progress through the story of the game.

After each ninja completes one level of their individual quests, any ninja chosen will go on the same quest to get the four Golden Weapons back from Samukai.

The most common enemies in this game are skeletons, with the four Dragons and Samukai as bosses. Health and damage of skeletons increases as the game progresses. When a skeleton is about to attack, they flash and hold out their weapon.

Weapons help to boost a ninja's element stats. Many weapons are locked, and can be unlocked by completing story levels or entering codes.

To redeem the codes you need to rotate the totem symbols then click the dragon to activate. 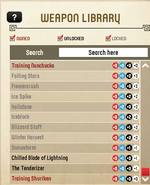 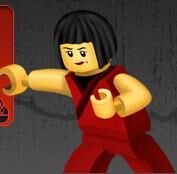 Nya
Add a photo to this gallery

Retrieved from "https://ninjago.fandom.com/wiki/Spinjitzu_Smash!?oldid=618018"
Community content is available under CC-BY-SA unless otherwise noted.