Michael Adamthwaite
Squiffy is a citizen of Ninjago. In an alternate timeline, he was originally a generic citizen named Landon,[1] alongside his colleague Colin (now Bucko), though ultimately sought to become a pirate. However, that wouldn't last long, and due to Jay's final wish reversing the recent events, he would never become a Sky Pirate.

Alongside his colleague, Colin, he sought to become a Sky Pirate and was likewise introduced by Flintlocke to Nadakhan. Introducing himself, Squiffy and his partner Bucko, were promptly dismissed.

Alongside Bucko, he would attempt to spy on Jay and his team of ninja replacements, relying on his lip-reading skills. However, Jay would fool him by uttering random gibberish, and Squiffy would be forced to escape upon realizing he and Bucko had been spotted. Flying away on their vehicles, Squiffy would ultimately be captured by Captain Soto and arrested by the Police Commissioner. 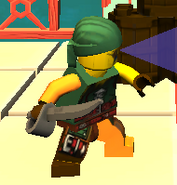 Retrieved from "https://ninjago.fandom.com/wiki/Squiffy?oldid=548420"
Community content is available under CC-BY-SA unless otherwise noted.