Staff of the First Spinjitzu Master

View source
“There's a secret message engraved on it. All these years, I had no idea.”
— Wu to Jay, "Ghost Story"

Staff of the First Spinjitzu Master

At some point before his death, the First Spinjitzu Master engraved three symbols onto his staff that gave the location of his tomb, and passed it on to his youngest son, Wu. He hid the other one in his tomb.

Master Wu uses the staff to attack Samukai and save Kai. He later used it to activate the training course in the monastery.

Wu used his staff to "thread the needle" to get the shrinking pill to the Overlord. However, this plan failed as Pythor ate it instead.

After possessing Lloyd, Morro goes to Steep Wisdom tea shop looking for Master Wu and the Staff. After a battle between the ninja and Wu, the staff is dropped over some dust, revealing the engraved symbols. Both Wu and Morro are surprised at this, and the struggle continues. Master Wu manages to retrieve the staff, and he, the ninja, and Nya escape on the Destiny's Bounty.

Morro chases the Destiny's Bounty on his dragon to get the staff back. He lands on the ship and attacks the ninja. While Jay, Cole, and Nya (as Samurai X) try to fend him off, Wu, Kai, and Zane brought it to their quarters in an attempt to print the symbols on parchment paper. However, despite their efforts, Morro gains the staff and flies it away. Luckily, Wu managed to make an imprint of the message before giving up the staff, which is later deciphered by Misako, who reveals that the first symbol means "Airjitzu."

Later that night, Morro walks into a bar, where he lays out the staff on some chalk, revealing the symbols. He then summons Wrayth, who may have helped him figure out the first symbol.

Morro reviews the second symbol on the staff, and summons Ghoultar and Bansha to help him decipher it.

After learning Airjitzu, the ninja draw their attention to the second clue, a sword in some clouds , which is revealed to be the Sword of Sanctuary.

The ninja see that the last symbol refers to the First Spinjitzu Master's tomb.

In the show, the Staff of the First Spinjitzu Master resembles an ordinary, wooden bo staff, the main difference being the three, nearly invisible symbols carved into its side. However, in the sets, the Staff has a golden and more ornate appearance, additionally being longer. 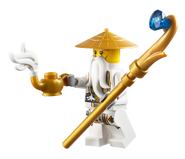