Ninjago Wiki
Register
Don't have an account?
Sign In
Advertisement
in: Ninjago, Ninjago: Masters of Spinjitzu, Sons of Garmadon,
and 6 more

View source
watch 01:33
Wiki Targeted (Entertainment)
Do you like this video?
Play Sound
“
I heard she dragged a guy on her bike for two miles, just 'cause he was looking at it the wrong way.
— A S.O.G. member to Mohawk in "The Jade Princess"
„

Ultra Violet used her Stone Booster Bike when the Sons of Garmadon invaded the palace. She later uses it to chase down Lloyd and Harumi when they had the Mask of Deception. After claiming the mask, the S.O.G. chase the two to the docks, but are able to escape.

Ultra Violet puts a captured Cole onto her bike before speeding off when the rest of the ninja arrive.

Killow allows Snake Jaguar to use Ultra Violet's bike much to her disliking. However, Zane is forced to abandon the bike after one of the Sons of Garmadon tried to attack him.

Ultra Violet rides the bike to the location where the ninja crashed. As she and the Sons of Garmadon charge towards the Destiny's Bounty, they are met by P.I.X.A.L. in her mech. 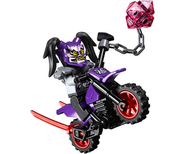 The Stone Booster Bike in set form with Ultra Violet wearing the Mask of Hatred.