Ninjago Wiki
Register
Don't have an account?
Sign In
Advertisement
in: Galleries needing organization, Ninjago, Master of the Mountain,
and 8 more
English

"Fire Stone Mech" redirects here. You may be looking for the set.

“A mech. But unlike any mech I've ever seen. It appears to be made of stone?”
— Master Wu in "Masters Never Quit"

Inoperable
The Stone Mech[1] (alternatively spelled stone-mech[2]) was a mech that was kept in Heart of the Mountain. It is assumed by Fungus that it was used to build the Temple and was used by Cole to help Wu, Vania, and the Upply escape the Dungeons of Shintaro.

While at the Heart of the Mountain, the crew spots an old mech and Wu realizes it's made out of stone. Plundar tries to operate it, but there are no controllers.

The Upply and Vania install wheels at the bottom of the mech so the mech could push the mine carts. Cole has issues activating the mech until realizing it uses Elemental Energy. Despite activating it, he has trouble balancing the mech due to the wheels.

They are able to get the mech onto the tracks, so he begins using the mech to push the mine carts. However, they encounter a Magma Monster and Dire Bats which distracts Cole. While fighting the Magma Monster, Cole pulls out a sword and cuts the tentacles. He then spots the mine carts about to head into the lava, so he is able to save the people inside as well as destroy the Magma Monster.

The mine carts and the stone-mech make it to the surface with the mech becoming inoperable after the lava overheats the controls.

Team up with Hero Kai, Hero Cole, Hero Nya and the Fire Stone Mech as they battle dark and evil forces in the bowels of Shintaro Mountain. The Fire Stone Mech is a powerful weapon, armed with two giant swords and powered by the ninjas to help them escape captivity in this dark underground world. Jump into the mech's cockpit and fire its stud shooters to blast your way to freedom![3] 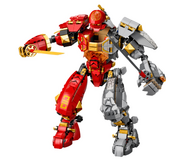 The mech in LEGO form.

Cole powering up the mech with his Elemental Powers.

The mech covered in lava.

Cole and Vania exiting the mech after it gets destroyed.

The mech on the ground in the Kingdom of Shintaro.