View source
watch 01:25
Jurassic World: Dominion Dominates Fandom Wikis - The Loop
Do you like this video?
Play Sound
“Sensei, it's as we feared. Another Stone Samurai Warrior is loose on the streets.”
— Zane, "The Day Ninjago Stood Still"

Destroyed
The Stone Swordsmen were members of the Stone Army. As their name suggests, Stone Swordsmen usually wielded silver katanas, as well as a black-and-red buckler in their free hand for added defense.

The Stone Army were revived by the venom of the Great Devourer and attacked the Serpentine. They were freed and started destroying the City.

A Stone Swordsman brought in a box of Dark Matter and said they uncovered more Dark Matter, but at the expense of losing many Warriors.

When Garmadon asked for the Army to gather, several Swordsmen attacked Wu, but Lloyd and Misako trapped them. Later, they spotted Zane and tried to capture him, but they escaped and started pursuing them to the Temple of Light.

The Swordsmen helped build the Garmatron. When Cole kicked a Scout off the platform, the Army attacked the ninja. Eventually, they tried to stop the ninja from returning the Helmet of Shadows to its perch and succeeded. They kidnapped Nya as the rest of the team falls off a cliff.

Two Swordsman brought Nya before Garmadon and were then ordered to infect her with Dark Matter. A Swordsman and Scout refilled the cannon when Garmadon and the Overlord requested it. After a brief battle, the Overlord created a portal for the Army to go to Ninjago City.

The Army prepared to attack the ninja, who were actually diverting their attention away from Lloyd. When Nya got Lloyd out of his mech by shooting at him, the Army attacked him, but the ninja went to save him. Just when they were outnumbered, Dareth donned the helmet and commanded the Army to go after the Overlord. After Lloyd purged the Overlord from Ninjago with his Golden Power, the Stone Swordsmen were destroyed with the rest of the Stone Army.[1]

The Stone Warriors were resurrected on the Day of the Departed by possessing their statues from the Hall of Sidekicks at the Ninjago Museum of History. While Dareth was talking on the microphone during the Day of the Departed concert, he mistook the Stone Warriors as costumes. After he realized they were real, they chased him into the museum. He found the Helmet of Shadows and ordered the army to take on Kozu.

They had an appearance similar to that of the Stone Scouts, but with full-sized legs capable of motion, as well as red, jagged shoulder armor, and blue facial markings. 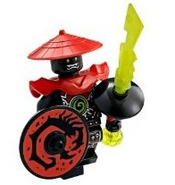 Stone Swordsmen in the Legacy of the Green Ninja mural

Stone Swordsmen in the Season 10 opening

Without shoulder armor in The Final Battle 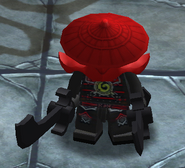