Ninjago Wiki
Register
Don't have an account?
Sign In
Advertisement
in: Collectible Items, Artifacts, The Island,
and 10 more
English

“
For thousands of seasons, our people have been entrusted with the protection of the amulet. Entrusted by the First Spinjitzu Master himself to keep it from Wojira, for if the serpent ever obtained it again, the seas would rise up and swallow all the world.
— Mammatus in "The Tooth of Wojira"
„

The Keepers of the Amulet
71745 Lloyd's Jungle Chopper Bike

Destroyed
The Storm Amulet of Wojira (also referred to as the Amulet of Storm[2]) was an ancient amulet that was given to the Keepers by the First Spinjitzu Master to protect it from Wojira. Along with the Wave Amulet, it was one of the two amulets that were used by Wojira to rule the seas of Ninjago.[3] However, as a result of Nya destroying the Wave Amulet, the Storm Amulet got destroyed as well when Wojira was defeated.

Before the creation of Ninjago, the Storm Amulet originally belonged to Wojira, who used it to affect the Endless Sea with violent storms and control it. Eventually, Nyad pried the Storm Amulet from Wojira's head and the First Spinjitzu Master gave it to the Keepers, so they can protect it from Wojira.[4]

While the ninja were looking for Jay, Clutch Powers attempted to steal the Storm Amulet. However, he was stopped when the Keepers electrocuted him and the others.

While explaining that Wojira was real to Maya, Nya mentions the Storm Amulet until she was interrupted by Kalmaar, who asked for the location to the Island of the Keepers after Nya mentions it. Nya then refuses to answer to prevent Kalmaar from knowing more information about the Storm Amulet.

After planning to stop Kalmaar from getting the Storm Amulet, the ninja, P.I.X.A.L., Maya, and Benthomaar went to the Island of the Keepers so they can convince the Keepers to give them the Storm Amulet. However, once Nya was given the amulet, she and the others soon realized that the amulet was a fake and warned Cole where the actual amulet was.

The Storm Amulet is in Clutch Powers' possession as he falsely explains how he obtained it to his fellow Explorers Club members. It was in Clutch's hands until Kalmaar broke into the club office, where he gave it to Wu. Wu and Kalmaar then fought over the amulet.

Kai, Cole, Ray, Wu and Misako fight against Kalmaar and the amulet reaches Antonia and Nelson, they try to escape but Kalmaar ends up taking the amulet.

After getting away with the Storm Amulet, Kalmaar reunites the two amulets and awakens Wojira with them. 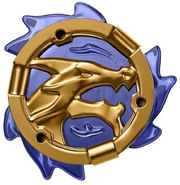 In LEGO form (The Island) 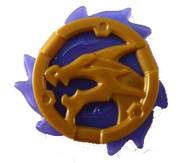 Both versions of the amulet side-by-side

Replicas of the Storm Amulet