“
You wanna know more about us, first you gotta become one of us. And to be a Son of Garmadon, you first have to ride with us. So what do you say, boys and girls? Shall we take him to the Teeth?
— Killow to Zane in "Snake Jaguar"
„

Day of the Departed/Yin-Yang Eclipse

The Street Race of Snake Jaguar was an initiation race that was used by Sons of Garmadon to welcome new members.

When Zane was disguised as Snake Jaguar after saving Mr. E, he gained the trust of the Sons of Garmadon. However, Killow said that he had to complete an initiation race to become an official member.

Zane was given Ultra Violet's bike under the Quiet One's orders. They race through Ninjago's subway system, when the Sons of Garmadon realize that Zane is a spy. The metro empties out onto the streets of Ninjago city, where Zane is given a new bike by Nya.

Many members have fallen behind, and soon, only Killow and Mr. E were left with Zane in the race. They drive through The Teeth, where Killow activates the Oni Mask of Deception, resulting in Zane defeating him with the help of his Falcon.

Soon, only Zane and Mr. E are left. They crash besides a cliff, where they fight. Mr. E wins, and he puts something inside Zane's chest before informing the Quiet One that the “trap has been set.” 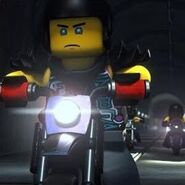