View source
watch 01:25
Jurassic World: Dominion Dominates Fandom Wikis - The Loop
Do you like this video?
Play Sound
“Then perhaps we should do something unpredictable. Something that makes no sense to anyone.”
— Zane

Sweatin' to the Goldies is the fourth Ninjago: Reimagined short and is animated by WildBrain.[1]

Everyone in NINJAGO City is talking about the new movie: 'Clutch Powers: A Musical Life'. Jay and Zane find it weird that Clutch breaks out in song and dance. Not reality - very unpredictable. But maybe that is the only way to defeat a villain that knows your every move.... to do something unpredictable..[2]

Gayle Gossip is seen reporting on a musical premiere, called Clutch Powers: A Musical Life. Clutch Powers, holding the Teapot of Tyrahn, then takes the microphone from her and begins to talk about his musical. He wishes that everybody in Ninjago would come to see his movie; a puff of smoke appears and Nadakhan's theme is played for a moment. It then cuts to Zane and Jay talking about how the musical was horrible and confusing. Jay and Zane pose for photographs. Zane asks to go back to the monastery, but Jay declines, saying that the best part of a movie premiere is the after party. However, they get a call that there was a break-in at the museum. Reflectra is then seen stealing art. Jay and Zane bust in. Jay begs Reflectra to give up because he wants to make it to the after party, worried that it will be full if they delay, and asks Reflectra who she is. She introduces herself and kicks a computer at the two ninja. Zane and Jay attempt to use their elements to defeat her, but she reflects it back at them with diamond-shaped spinjitzu. They try to beat her with Spinjitzu, but she reflects that away as well. Reflectra remarks that she has studied the ninja's movements. Consequently, Zane and Jay break out into song and dance to defeat her because it's new and unexpected. In the end, the duo emerge victorious and Jay points out that they need to make sure Clutch never finds out about this before setting his sights on making the after party.

Kevin Burke's beach towel based on this short 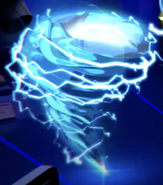