View source
watch 01:23
Wiki Targeted (Entertainment)
Do you like this video?
Play Sound
“
You can't hurt me here. You're banished. Trapped in the Underworld.”
“And that is why you are going to remove the Sword of Fire for me.
— Kai and Garmadon in "King of Shadows"
„

Intact (reforged)
The Sword of Fire is one of the four Golden Weapons used by the First Spinjitzu Master to create the realm of Ninjago. After forging the island, the weapons were passed onto his sons, Wu and Garmadon, who were to keep them safe. Yet when Garmadon was corrupted by the Great Devourer, he tried to steal the weapons, using the Sword of Fire and Nunchucks of Lightning to fight his brother. Wu was forced to defeat his brother, who was condemned to the Underworld, after which Wu hid the Golden Weapons.

Many years later, Wu trained four ninja and sent them off to claim the weapons. Kai, the Master of Fire, claimed the sword and protected it from Lord Garmadon. When Samukai wielded the four Golden Weapons simultaneously, he was disintegrated, creating a portal that allowed Garmadon to escape the Underworld. The ninja would wield the Golden Weapons—which doubled as vehicles, allowing Kai to create the Blade Cycle—in their battles against the Serpentine, but they eventually gave the weapons to Lord Garmadon in a bid to kill the Great Devourer. Using the Golden Weapons, Garmadon defeated the beast, but took off and forged them into the Mega Weapon, which the ninja eventually destroyed and shot off into space. The fused weapons wound up on a star later known as Arcturus.

Towards the end of the Nindroid crisis, the Overlord sent Cryptor and several Nindroids to Arcturus, where they claimed the remnants of the Golden Weapons. Despite their efforts, the ninja failed to stop the Nindroids from escaping with the fused weapons, which they melted down and turned into the Golden Armor. The armor was worn by the Golden Master, the Overlord's god-like form, as he wreaked havoc on Ninjago using the Ultimate Weapon, parts of which were also built using the Golden Weapons. During the climactic standoff at Borg Tower, Zane sacrificed himself and grabbed hold of the Golden Master's harnesses, which were molded from the Golden Weapons. While being overwhelmed with power, Zane froze the Golden Master, destroying both of their physical forms in the process. The Golden Armor was stored away by Cyrus Borg for safekeeping, as Wu had done so many years earlier.

Kai reforged it in order to fight against the Oni. After using the Tornado of Creation, it was rendered powerless.

When the First Spinjitzu Master passed on, he entrusted the weapons to his two sons, Garmadon and Wu. However, Garmadon attempted to steal the weapons for his own selfish goals, forcing Wu to confront him. After Wu defeated his brother and caused him to be banished to the Underworld, Wu hid the weapons.[1][2]

During their search for the Sword of Fire, Master Wu and his four ninja proteges, Kai, Cole, Zane, and Jay, decided to rest in the Forest of Tranquility after having found the other three weapons. In the middle of the night, Kai woke up to see Nya standing nearby calling for him, which lured him to the Fire Temple.

Upon reaching the Temple, Nya was revealed to be Lord Garmadon's shadow in disguise, and Lord Garmadon showed Kai the real Nya suspended by a chain over the lava. He told Kai that the only way to save her was to cut the chain with the Sword of Fire, and, despite knowing that he was playing into Lord Garmadon's trap, Kai pulled the sword out of its pedestal and saved Nya.

Kai was then faced with several shadow versions of himself, and while trying to fight back he realized that he could not make any contact with them. Master Wu appeared using his own shadow to fight off the others.

Lord Garmadon awakened the Fire Dragon, and Master Wu departed to the Underworld in an attempt to keep the Golden Weapon from his brother.

Master Wu woke up in the Underworld after passing out during his journey, and he went to go search for Lord Garmadon.

The ninja recruited the four dragons, using them to cross over to the Underworld, and after they used the Tornado of Creation to fend off the Skulkin and Spykor, they searched for Master Wu.

Master Wu found Lord Garmadon, who commanded Samukai to attack him. The ninja arrived during Master Wu's battle, which Wu lost shortly after. Samukai wielded all four Golden Weapons at once; however, due to the power of the weapons being too much for him to handle simultaneously, he disintegrated and created a portal for Lord Garmadon to escape.

In defense of Ninjago

After Lord Garmadon escaped from the Underworld, each ninja took up the weapon corresponding to their element, leaving Kai in possession of the Sword of Fire. The Fire Dragon, Flame, continued to guard it by becoming Kai's mount and pet.

During a three-hour video gaming marathon with the other ninja, Kai carelessly left the Sword of Fire on the floor, slowly burning a discarded slice of pizza on the floor.

Kai brought the Sword of Fire along with him when the ninja journeyed to Jamanakai Village to stop Lord Garmadon, though didn't use it as the threat turned out to be the dark lord's son, Lloyd.

Kai used the Sword of Fire during the tournament to determine who would be the Green Ninja, but during the fight, he lost control of the sword's power resulting in flames spreading everywhere.

The Nindroids succeed getting the Weapons of Spinjitzu and have reforging them into the Overlord's ultimate weapon. The Golden Master starts to destroy New Ninjago City with his newly formed mech—made out of the gold from the Weapons of Spinjitzu. However, the Nindroids were not the only ones to escape; the ninja have used their elemental shields, and have traveled out of space. The Golden Master gets frustrated and plans to defeat the ninja. He now performs his own Spinjitzu, trying to stop the ninja from going into the Temple of Fortitude. He, however, fails. The Heroes of Ninjago put on armor to resist the Golden Power from him. He, somehow, grabs all the ninja except Zane. The White Ninja eventually destroys himself and the Overlord. The next day when the Titanium Statue is revealed, a marble version of the Sword can be seen on the Statue's back.

Kai reforged the weapon and used it in the battle against the Oni. The weapons were seen powerless after vanquishing the Oni.[3]

The Sword of Fire is able to engulf its blade in flames and shoot fireballs at enemies or objects. It can also transform into the Blade Cycle if the wielder can maintain their focus.

This powerful blade is wild and dangerous. It burns through the air and anything on the other side of it. It’s also alive and hard to hold. This sacred weapon can only be held (and tamed) by someone who’s mastered fire. It’s one of the four Weapons of Spinjitzu, and it helped create Ninjago.[link unavailable] 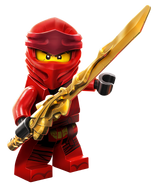 Legacy Kai with the sword

The Sword of Fire in Wu's Story

The Sword of Fire with the other Golden Weapons

Kai sleeping with the Sword of Fire above his head

Kendo Armor Kai fighting with the Sword of Fire

The Sword transformed into the Blade Cycle

Golden katana in the place of the Sword of Fire

The Sword of Fire being reforged by Kai

In LEGO Dimensions with Kai