Ninjago Wiki
Register
Don't have an account?
Sign In
Advertisement
in: Ninjago: Masters of Spinjitzu, Ninjago, Robots,
and 14 more
English

The Last Voyage
70594 The Lighthouse Siege

Michael Adamthwaite
Tai-D[1] (also known as Gizmo[2]) is a robot created by Dr. Julien used to assist the inventor. Tai-D resided at Lighthouse Island for many years, keeping Julien company during his time there. Later, in the alternate timeline, it aided Jay and Nya when they were hiding from the Sky Pirates.

At some point after his imprisonment, Dr. Julien created the robot for serving tea and cleaning.

After Wu, Misako and the ninja arrived at the lighthouse, Julien had Gizmo serve them tea. As Tai-D rolled around, the ninja were amazed by his abilities, with Jay trying to mess with Tai-D. The robot didn't take kindly to this and burnt Jay, warding him off.

During Jay and Nya's visit, Tai-D was helping to clean up, even putting items back into Jay's bag when they were trying to unpack. Tai-D was the one who leads Nya and Jay to Echo Zane and played chess with him afterward, in which he sneaked pieces under the table, much to Echo Zane's confusion.

Later, upon Nadakhan's arrival, he tried to fight back the Sky Pirates alongside Echo Zane, but to no avail. He was eventually shut down by the Djinn when he struck the robot with the Djinn Blade.

Echo Zane was in the process of repairing Tai-D when Jay arrived to recruit him. 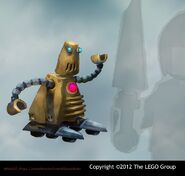