Alive
Takuma is a citizen of Ninjago City and appears to be a sailor.

Takuma can be seen in the movie next to Ham when Lloyd finally reveals his identity as the Green Ninja, and is talking to Meowthra about how he knows what it's like to be treated unfairly. 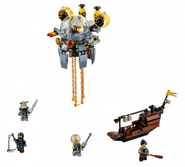