Ninjago Wiki
Register
Don't have an account?
Sign In
Advertisement
in: 2021, 2021 characters, Ninjago: Masters of Spinjitzu,
and 8 more
English

View source
watch 01:25
Jurassic World: Dominion Dominates Fandom Wikis - The Loop
Do you like this video?
Play Sound
“I will continue to build my puppet army, and no one will be able to stop us!”
— Tanabrax to Garmadon, The Lair of Tanabrax

Deceased
Tanabrax was a dark puppet master. Long ago, Tanabrax was an average puppeteer until he discovered a magical medallion that originally belonged to a djinn, and became obsessed with it.

He then eventually decided to conquer Ninjago with an immortal army of puppets by stealing the souls of villagers. During the years, Tanabrax became a living manifestation of darkness due to the medallion's magic. However, he was defeated after being exposed to sunlight by Moody, who turned on him.

Long ago, Tanabrax was a puppeteer. But one day, a djinn's chariot crashed into his theater. During the collision, a magical medallion fell out of the carriage, which was taken by Tanabrax as a fair payment for his destroyed theater. He soon got obsessed with the medallion and tried to figure out how to use it.

After learning how to speak djinn, Tanabrax soon figured out how to use the locket and tested it on Bunch and Moody, who later kidnapped the villagers for Tanabrax so he could turn them into his army of puppets.

After Garmadon followed the puppet army to find out where they were taking Wu, he learned that the puppets took him to an underground lair owned by Tanabrax, where Tanabrax was glad that Bunch and Moody brought Wu as another victim to join the puppet army, and quickly made a puppet version of the young ninja.

However, Wu freed himself and prepared to fight the puppet master. But before he could do anything, Tanabrax used the medallion on Wu, stealing his soul and transferring it to the puppet. Moments later, Tanabrax and the puppet army noticed Garmadon, but the latter escaped, taking Moody with him during the process.

“He used to look like a regular man-io, but now he's mostly made of darkness.”
— Moody

His appearance as a living shadow featured him wearing a long black robe for his attire, and has glowing yellow eyes, although they can turn red when he is angry. And instead of feet, he had shadowy tendrils that made him look like he was floating.

“Tanabrax can't steal souls anymore, but he's still as powerful as before!”
— Garmadon

“He used to look like a regular man-io, but now he's mostly made of darkness. That's why he has to live underground. He can't stand the sunlight.”
— Moody

A mysterious powerful villain, Tanabrax is a creature of shadow, using the dark energy of a djinn’s medallion to build his own puppet army to take control over the world of Ninjago.

"Tanabrax" is likely derived from "tenebris," the Latin word for darkness.

On the cover of The Lair of Tanabrax 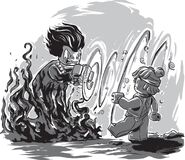 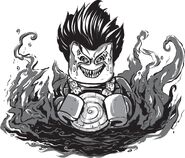 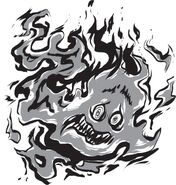