Drinkable
Tea is a generally hot beverage made from boiling water and herbs. It is a fairly popular drink in Ninjago, with Master Wu being especially fond of it.

Mystake's tea shop in Ninjago City sold several varieties of tea, including some with special powers. Another known tea shops were Steep Wisdom and Steeper Wisdom.

As a test, Kai had to complete the obstacles in Wu's monastery before he finished his tea. Before he succeeded after many days of attempts, Kai made Wu spill his tea by throwing his wooden sword at it.

Master Wu was shown to be drinking tea when he recruited each of the ninja, with the exception of Kai.

In the wake of Lloyd being captured by the Serpentine, Master Wu visited Mystake's tea shop to purchase some Traveler's Tea. He later used it to travel to Lord Garmadon's Dimension.

When the ninja went to visit Cole's father, Lou, the latter made a pot of lemon-honey tea for the visitors while he asked about his son's recent activities.

When the ninja and Nya infiltrated the Serpentine's underground fortress, a battle erupted between the ninja and the snakes for control of the Fangblades. During the battle, Master Wu mainly observed his pupils' progress from the shoulder of the Samurai Mech and enjoyed a cup of tea. When a Venomari Scout tried to climb on the mech, Master Wu poured hot tea on his head.

While fighting the Serpentine atop the Serpentine Express, Chokun climbed onto Nya's Samurai Mech. Instead of fighting, Master Wu offered some tea to the Constrictai Soldier—when the cup was full, he punched Chokun off the Samurai Mech and deftly caught the cup without spilling a drop.

During the escape from the Great Devourer, Kai threw Master Wu's teapot off the Destiny's Bounty to try and increase its speed. Lord Garmadon was later seen ordering Traveler's Tea from Mystake but abandoned it when he saw the ninja battling the Great Devourer on television. After the Great Devourer's destruction, Master Wu found his teapot amid its remains, commenting that the tea was still hot.

Once Master Wu and Nya heard of the Grundle situation from Lloyd's message, Master Wu decided to visit Mystake for Tomorrow's Tea. With the tea in their possession, the pair hurried to the comic store where the Grundal was spotted, finding it menacing the de-aged ninja. Lloyd used the tea to reverse the de-aging magic that revived the Grundal and reduced his friends to children but was also aged to teenage years due to being caught in the "explosion" of the tea.

After Dr. Julien turned off Zane's memory switch, Samukai revived Dr. Julien with Resurrectea, hoping that he would build vehicles for his army.

Pythor made some tea while he's held captive in Kryptarium Prison.

Following the loss of his brother, Wu retired as a master and opened a tea shop called Steep Wisdom at Garmadon's monastery. He instructed all the other ninja to advertise the tea shop.

While showing Morro a kite, Wu's tea kettle starts to whistle. After checking it, he came back with a cup of tea, surprised to find out Morro is the Master of the Wind.

When Master Wu and the ninja returned to Steep Wisdom, the ninja were surprised to see that the land was no longer theirs. They learned that Wu sold his business to Cyrus Borg for more advanced vehicles to help them defeat Morro and the ghost army.

Misako gave Master Wu Focus Tea to help with his drowsiness. Noticing Lloyd has something going on in his mind, Wu suggests he have some too.

When she was attacked by a Vermillion, Misako threw a teapot at the warrior.

Lloyd, Jay, Zane, and Cole purchase the Tea of Truth from Mystake before they question Luke Cunningham at the police station, but Lloyd sees a painting of the Oni and the Dragon and has Cole and Zane go while he and Jay stay behind to listen to the tale where they were given the Tea of Enlightenment. At the station, Zane had the tea poured in a cup as well as had a regular cup of tea for Cole. But after a little incident with a suspect, Cole accidentally drinks the Tea of Truth while questioning Cunningham.

When Nya questioned what Cole was feeding the Baby, he answered tea, as the baby won't drink anything else. Nya scolded him, telling him that babies shouldn't be having tea.

The baby, after a growth spurt, drank some tea and said the ninja's motto, allowing them to realize he is Master Wu.

When Nya told Toddler Wu to grab the keys to their chains, he mistook the word for tea and drinks from the kettle after being told the actual word.

Mystake gave Lloyd some tea to help heal him after his battle with Garmadon. Later, she gave the ninja a bag of tea. They used it right when Colossus was about to crush the Bounty and realized, after ending up in the Realm of Oni and Dragons, that it was Traveler's Tea.

After Mystake explains to Lloyd the ninja are in the Realm of Oni and Dragons, she gave him Earl Gray to clear his mind.

After Dareth begged Mystake for a tea that can give him powers, she agreed.

When the Land Bounty ended up upside down, Cole managed to recover the Traveler's Tea, but when it went over a cliff, he ended up losing it, earning a lot of reprimands from the other ninja.

In Cole's nightmare, the ninja made him go back to get the tea. He failed when the Land Bounty fell with him still trapped inside.

Krag takes Cole to the Traveler's Tree so that he can take some of the leaves. He then showed them to Nya and Jay, claiming that he wouldn't have gotten them without Krag's help.

After Cole's success with getting Traveler's Tea leaves, Jay, Nya, Krag, and Cole walk back to the village, celebrating and pondering about the tea. Cole promises that he would never let the leaves out of his sight.

P.I.X.A.L. and Wu use a very advanced version of Traveler's Tea made by Mystake to open a portal to the Never-Realm. They open various portals throughout the episode and accidentally release The Preeminent when they opened the Departed Realm. Eventually, they return her back to the Departed Realm but end up using all their leaves.

Wu drinks tea and walks through Shintaro Palace Gardens as Cole and Vania come from the dungeons. Wu gets scared of them and pours the tea.

Wu's tea of choice, even in tough situations and when he was regressed into a baby.

One of Mystake's special blends, Traveler's Tea is a substance that enables users to warp to certain locations, including other realms. It comes in two forms: As brewed, or in a teabag to go. According to Wu, Traveler's Tea that has been grown in Ninjago won't work in the Never-Realm. One way to find it in that realm is with the Traveler's Tree.

Tomorrow's Tea is another one of the many special blends offered by Mystake. When used, it can rapidly age things and undo the effects of time-reversing magic.

Brewed by using an Inky Lemonberry, the Tea of Insight can give those who drink it special visions.

A special blend used by Samukai, Resurrectea is able to bring the dead back to life, but only when the target's body is present to ingest the brew.

A blend of tea that can presumably erase memories of events.

The user is able to receive special visions. Decade after Garmadon's banishment Wu meditated, and Eventuali-Tea revealed to him that his brother wanted to return from the Underworld. Tea is made from an herb called Boscus Spiritum, which grows only in clearings north of the Forest of Tranquility.[1]

Seen as a dark-colored tea, the Focus Tea helps the user concentrate.

Unlike most other tea, this is used just for taste and has no special effects.

It is a tea that helps the user to remember certain events in his life.

The user is able to temporarily float in the air.

As suggested by the name, this tea can presumably explode. It probably was the tea Master Wu tried to brew in the "Wu's Teas" outro.

Although the effects are unknown, it presumably grants the drinker a sense of humor.

The drinker gains the ability to sing or play an instrument, even if they've never touched in instrument before. Since this tea is untested, the side effects include playing too hard.

The drinker of this tea gains beauty in terms of physical appearance. It also seems to make them physically fit.

The user grows in size and gains great strength, but goes on a rampage.

The user of this tea is able to calm down in a meditating state, even if someone is continuously trying to annoy them.

These teas are presumably just for taste rather than having any effects.

A presumably disgusting tasting cold beverage. Jay seems to enjoy it's taste. Has no magical effect.

The user of this tea has to answer any questions and blurt out information truthfully whether they want to or not.

The person who drinks this tea can see nearby ancient paintings moving.

The person who drinks this tea clears their mind, likely having no special effect.

In "Snakebit," Nya creates a tea from the anti-venom in the Fangpyre Staff to reverse the effects of the Fangpyre bite on Ed and Edna.

In "The Oni and the Dragon," Zane gave Cole a cup of tea. The name of this tea and its effects, if any, is unknown. It looks exactly like the Tea of Truth.

In "How to Build a Dragon," Mystake gave Dareth a whole cauldron of tea that can give him powers. However, it tastes bad, he has to drink the whole thing, and he has to relieve himself often.

In The Book of Spinjitzu, there is mention of a type of tea that gives the user a mustache and beard.

In "Secret Teas," some teas were used, but their names are not known. Their effects include: growing, shrinking, transforming into an octopus, and glowing. 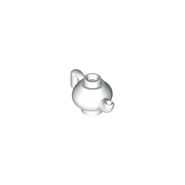 Wu about to pour tea on Lasha 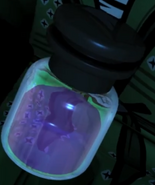 Traveler's Tea poured out because of tilting.
Add a photo to this gallery

Dareth with a giant teabag.

Lloyd holding a Traveler's Tea leaf.
Add a photo to this gallery

Retrieved from "https://ninjago.fandom.com/wiki/Tea?oldid=625941"
Community content is available under CC-BY-SA unless otherwise noted.