View source
watch 01:36
We're Getting Mutants in the MCU - The Loop
Do you like this video?
Play Sound
“The Teapot of Tyrahn. The ancient markings on the side describe it's a powerful relic that can trap mortals.”
— Zane, "Public Enemy Number One"

The Council of the Crystal King (painting)
891610 Clouse

Intact
The Teapot of Tyrahn is a legendary teapot in which Nadakhan is trapped. Long ago, Captain Soto trapped Nadakhan inside it and marooned the Djinn's crew across the Sixteen Realms. Following the ghost invasion, Clouse discovered the teapot and freed Nadakhan, but the deceptive djinn manipulated him and imprisoned Clouse in the teapot. Shortly after, Nadakhan would also imprison Wu and Misako there for some time until being transferred to the Djinn Blade.

When Nadakhan returned to Djinjago, he found his home realm was collapsing after the Cursed Realm's destruction. Nadakhan's father, Khanjikhan, gave him the Djinn Blade to imprison the souls of his adversaries. Nadakhan accepted the weapon, breaking the teapot and trapping those inside within the Djinn Blade.

When Jay made his final wish, recent events were undone and Clouse never found the teapot, leaving Nadakhan imprisoned inside it. Despite this, Clouse still attempted to retrieve it but was chased off by the citizens of Stiix, leaving the teapot lost in the city's wreckage, which ironically saved his life.

The teapot eventually found its way into the Desert of Doom and was eaten by Beohernie. When the ninja had to get a part of the Land Bounty from Beohernie's stomach, they took the teapot out of his stomach as well.

Somehow, the teapot then found its way to the streets of Ninjago City and was discovered by Clutch Powers.

200 years before the age of the ninja,[1] Nadakhan was captured in the teapot by Captain Soto. The teapot would later be either lost or abandoned and wound up in the city of Stiix.[2]

Following the ghost invasion, the city's citizens were left to clean up the destruction caused by the Preeminent. The teapot was lost amongst the wreckage and thrown into a garbage scow during the cleansing of the city.

Clouse, who survived the Cursed Realm's destruction, found the teapot and freed Nadakhan but was manipulated into being trapped inside it. Later, when Wu went to Domu, he would be confronted by Nadakhan and was tricked into wishing it away, thinking he would be in a comfortable place with tea and trapped in the teapot as well.

During her interrogation at the police station, Misako was also confronted by Nadakhan and trapped in the teapot with Clouse and Wu.

When Nadakhan returned to his home realm, he found it was collapsing and his father gave him a powerful sword with which to trap the souls of his enemies. Nadakhan took the weapon and used it to shatter the Teapot of Tyrahn, trapping Wu, Misako, and Clouse in the sword.

The teapot was restored when Jay wished that the events of Skybound had never transpired, causing time to go back to before the teapot was found and trapping Nadakhan inside it once more.

In this timeline, Clouse was driven off by the citizens of Stiix before he could retrieve the teapot, presumably leaving the artifact lost forever amidst the wreckage of Stiix.

Following its removal from Stiix, the teapot somehow found its way into the Desert of Doom, where it was swallowed by Beohernie.

The teapot was inside Beohernie’s stomach when Zane entered it. After Kai struck the beetle, it spat out Zane along with the teapot, the soda guzzler, and their picnic blanket, leaving the teapot lost in the desert.

Following its removal from Beohernie's stomach, the teapot somehow found its way onto the streets of Ninjago City.

The teapot was discovered on the streets of Ninjago City by Clutch Powers, who rubbed it but since he was not seen arranging the symbol on it into its proper place.

Lloyd mentions it when he wonders what the news the ninja just received was about.

Clutch donated the teapot to the Explorer's Club.

The teapot was on a table when Underhill grabs a coat hanger to use as a weapon when Kalmaar attacks the Explorers Club.

The teapot floated past the tour bus where Dareth was in.

The teapot was in Clutch's possession when he went to the premiere of Clutch Powers: A Musical Life. When he mentioned that his "wish" was to have everyone in Ninjago see his movie, a large cloud of orange smoke appeared and Clutch disappeared.

Clutch was running across the road ending at the Ninjago City Hall with the teapot in his hand.

Clutch was with the teapot, running out of the way from the Noodle Truck of Crime. 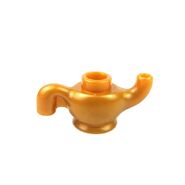 The Teapot of Tyrahn under Nadakhan in the March of the Oni opening.

The Teapot of Tyrahn under Nadakhan in the Skybound mural.

The Teapot of Tyrahn in a book

Clouse and Wu in the teapot

Soto with the teapot