Ninjago Wiki
Register
Don't have an account?
Sign In
Advertisement
in: Clarification needed, Ninjago: Masters of Spinjitzu, 2015,
and 2 more
English

Were you looking for the location?

“Because of your friends, you have done what we never could: united the Serpentine and your kind as one. Because of you, the balance is restored. And because of your father, our spirits can be free. You will have our eternal respect as the greatest warriors to ever battle for Ninjago.”
— Arcturus to Lloyd

The Corridor of Elders is the tenth and final episode of the fourth season of Ninjago: Masters of Spinjitzu and the 44th episode overall. It aired on Cartoon Network on April 3, 2015, in the United States.

The ninja and fighters discover there's a strategic location called the Corridor of Elders where they can make their last stand against Chen's Anacondrai army ... but even with the new Destiny's Bounty, their forces still aren't strong enough. Fortunately, Pythor escapes Chen's clutches and discovers there is one spell in the Book of Magic that could stop the war, but at a serious cost.

Chen's Anacondrai army lands in Jamanakai Village as its citizens flee in terror. The army continues onward, as Chen declares they won't stop until every village is conquered. Meanwhile, the ninja and the other Elemental Masters are scattered all around Ninjago after chasing down the decoy trucks. Chen hacks the city's airwaves and speaks with Garmadon and his allies, unveiling that Garmadon stole Wu's letter to Misako. Wu is infuriated, though Skylor urges them not to fight. In Chen's abandoned camp, Pythor runs from the swamp rat but manages to escape and find the Book of Spells. Learning that Chen's army is conquering Ninjago, Pythor devises a way to defeat them.

Neuro uses his Element to regroup the Elemental Masters in the Samurai X Cave, where they make a plan to fight Chen's followers, who have conquered the east coast of Ninjago. Wu proposes they use the Corridor of Elders to make their final stand, and everyone agrees. The Elemental Masters journey across Ninjago to rally support from its citizens. Eventually, the ninja and their allies arrive at the Corridor and prepare for battle. Chen's army arrives and starts fighting, with the ninja and their allies holding them back. In the sky, Nya, Misako, Wu, and Garmadon fly Destiny's Bounty, using it to destroy the cultists' vehicles. However, Chen uses the Roto Jet to blast apart the Corridor's walls, allowing his army to start passing through.

Having escaped Chen's camp by riding the swamp rat, "Rodrigo," Pythor arrives at the battle with the Book of Spells. Lloyd takes Pythor aboard the Bounty, where he explains that Garmadon can defeat Chen's army. Since he was the one who cursed Arcturus and the Anacondrai generals, Garmadon can take their place and allow them to escape and curse Chen's army. Garmadon realizes the sacrifice is their only way to victory, though Lloyd is infuriated and angrily departs. He dives into the battle and takes his anger out on the fake Anacondrai, as he remembers his past with his father.

Aboard the Bounty, Wu begins reading the spell to open the Cursed Realm; by now, he and Misako have forgiven Garmadon for his wrongdoings. Garmadon tells them to pass on an apology to Lloyd who suddenly returns and opts to read the spell himself - deeming it fair that he sends him off. As the portal opens, Garmadon says he sought to make the world in his image but realizes he did so in Lloyd. Lloyd finishes reading the spell, and Garmadon ascends to the portal.

As a flash of light subsides, those on the battlefield noticed this and momentarily stop fighting. Everyone is then shocked to see the spirits of Arcturus and his generals arrive at the battle; they condemn Chen's followers to the Cursed Realm. Chen pleads to Arcturus since they are on the same side, but Arcturus personally denounces Chen as a liar, cheater, and an impostor before banishing him as well. As Chen is taken away, he pleads to his daughter who ignores his pleas and he goes through the portal too, with everyone cheering on the victory.

With the war over, Lloyd is distraught by the loss of his father, but Arcturus arrives and praises him and Pythor for their heroism. Arcturus also restores Pythor to his original size, before he and the generals depart for another realm.

The ninja and Elemental Masters agree to keep in contact, as they go their separate ways after the war's end. As their allies clean up the Corridor of Elders, the ninja, Nya, Wu, and Misako commemorate the life of Garmadon, as a statue of him is built in the Corridor. While the group honors Garmadon, Lloyd burns the Book of Spells.

Not far from the scene, a ghostly figure appears, having escaped from the Cursed Realm. It angrily growls the name "Morro." 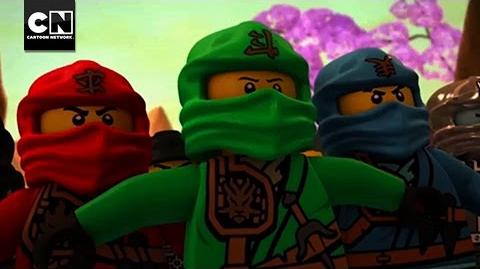