The Darkness Comes is the first episode of the tenth season, and the 95th overall of LEGO Ninjago: Masters of Spinjitzu. It aired in New Zealand on January 19, 2019 and on April 19, 2019 in the United States with the rest of Season 10 as a film.

As Ninjago City rebuilds, Faith arrives with a dire warning that the Oni have returned and are destroying the realms, one by one; Lloyd faces the possibility that to defeat this foe, he may need the help of another enemy.

Noble shows Lloyd to Garmadon's wing, stating it was built just for him. After unlocking the entrance, he runs off, leaving Lloyd to confront Garmadon by himself. When he reminds Garmadon that he had requested to see Lloyd, Garmadon claimed that it was unusual. When Lloyd threatened to leave, Garmadon remembered and told him that the Bringers of Doom were coming and that although he didn't care, he would rather not be destroyed along with Lloyd. He said that he had decided to help the Ninja defeat them, and that he was the only one powerful enough to do so. Lloyd refuses his offer and angrily storms off, but Garmadon assured him that he will come back.

Meanwhile, the citizens rebuild Ninjago while Cole, Zane, and P.I.X.A.L. wait in traffic, complaining that they are thirty minutes late. They wanted to use the Earth Driller to dig under the road, but it was new, so the trio decided to get out of the Earth Driller and run to their destination. Once they arrived, the Police Commissioner gave a speech and presented them with a rebuilt Destiny's Bounty as a reward for saving Ninjago.

At the Monastery, Jay is practicing how to ask Nya to be his Yang with Kai's help. Kai tells him to be confident, but Jay says it doesn't sound right. Suddenly, Dareth bursts in and asks them what's happening. Kai explains it to him and tells him to keep it a secret. Nya comes in and tells them that Wu is in the courtyard looking at the new Mural. They went outside to join him, and witnessed Firstbourne crashing near the base of the mountains. They went down to check on her, but she opened her claws and let Faith fall out. Faith informed them that "Darkness was coming" and they took her inside of the Monastery to heal. The rest of the Ninja arrive. Wu said that both Faith and Firstbourne would heal and continued explaining what Faith had told him.

A cloud of darkness had overtaken her home realm, and whoever touched it had been petrified. Lloyd told the others what Garmadon had said. Wu showed them his father's book containing a picture of The Omega. He said that his father had called them the "Bringers of Doom." The Ninja head out to warn the city.

Meanwhile, in Borg Tower, a watchman explains to his partner that artifacts from Hiroshi's Labyrinth had been relocated to the tower because it has better security. Unbeknownst to them, darkness escaped from the Realm Crystal and started to engulf the tower. The two escaped and wheeled Borg out while the other citizens evacuated.

The Ninja arrived to the Bounty and admired it. When they tried to fly, they realized that the thrust lever was wired backwards. After Zane fixed the label, they took off.

The Commissioner was working on a model ship, but an officer came in and told him that there was trouble in Ninjago. In the city, the dark clouds started petrifying everyone in its path. Zane claimed that they were too late and the Ninja sped off to rescue the people. The Commissioner and cops tried to stop the darkness, but without proper weapons, they had to back away. Fortunately, the Ninja arrived in time to save them and helped them up to the Bounty. The Ninja's Elemental Powers had no effect on the darkness, even when they used them together, and they also had to evacuate. Cole was grabbed by one of the tentacles, but Lloyd saved him. They saved more citizens, and Cole explained what the tentacle felt like. He said that he saw something inside the cloud that looked like an Oni, so the Ninja went back to Kryptarium to get Garmadon. Without another choice, they release him from prison. 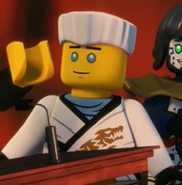 Add a photo to this gallery
Retrieved from "https://ninjago.fandom.com/wiki/The_Darkness_Comes?oldid=381502"
Community content is available under CC-BY-SA unless otherwise noted.