The Day Ninjago Stood Still is the 8th episode in the second season of LEGO Ninjago: Masters of Spinjitzu, and is the 21st overall.

Skales is crowned as the Snake King, and as his first act he plans to destroy the foundations of Ninjago, bringing it down around the population. At the Mojo Dojo, Lloyd is continuing his training, while Sensei Wu and Misako prepare to go over her research on the prophecy; Wu is slightly uncomfortable because of her relationship with Garmadon and the fact that he could have been her husband. Everything is stopped when the Serpentine begin their destructive campaign, sending the city into chaos. But the Serpentine come up against a barrier, an ancient door inscribed with carvings which look like Skales. He finds a switch which opens the doorway, revealing a vault where the Stone Army rest. The Great Devourer's venom melts through the roof of the vault and starts dripping on the statues, bringing them to life. They defeat the Serpentine and exit the vault, which closes behind them, trapping Skales and his people underground once again. The Stone Army rises and the city begins to evacuate, with the Ninja providing transport for those left behind, including comic-book writer Rufus, Dareth and the Bank Manager. The Ninja, with Lloyd, Nya and the Ultra-Dragon, gather the people and flee Ninjago City, though Misako stays behind to get her research and she and Sensei Wu are nearly left behind. Meanwhile, on the Dark Island, Garmadon is guided by the Overlord to an ancient orrery-like clock, designed to count down to the final battle. Garmadon dons the Helmet of Shadows, which both starts the clock and gives him command over the Stone Army.

Skales is crowned the new Serpentine King after Lord Garmadon's overthrow, and decides to bury Ninjago City and its citizens to ruin, so the Serpentine can take over as the rulers of Ninjago.

Meanwhile, the Ninja are training Lloyd to fight without using his eyes in Dareth's Dojo, making a mess in the process. While Master Wu waits in the Destiny's Bounty, he uncovers under his hat a picture of himself, Misako, and Garmadon before his banishment. Misako appears behind him, commenting that she had forgotten how pale Garmadon used to be. She shows Master Wu her research of the Green Ninja's prophecy, and while he is gazing over it she mentions how she should have chosen him instead. Master Wu says that the past is the past, but Misako takes his hand as she insists that there is always the future. However, they are interrupted by a strong earthquake, and Zane sends his Falcon to scout for danger.

The Serpentine traverse underground as the Constrictai burrow through until they find a mysterious and ancient door.

Meanwhile at the Island of Darkness, with the guidance of the Overlord, Lord Garmadon climbs a tall mountain that on top has The Overlord's "greatest weapon."

In Ninjago City, the Ninja save a woman who was trapped by the collapsing street. Then Misako realizes that, according to the prophecies, the earthquakes is a warning.

While investigating the markings on the door, Skales finds a button that opens it. They go through and find a large army of Stone Warriors, which come to life as the Great Devourer's venom drips onto them. The Serpentine attempt to battle them, but as they are indestructible, the Serpentine are easily overpowered. Acidicus asks if they should retreat, but Skales disagrees and continues fighting, only to be defeated soon after. The Stone Warriors all march out through the door, and then the door shuts, imprisoning all the Serpentine once again.

As the Stone Warriors emerge to the surface and wreak havoc over the city, Master Wu tells the Ninja to gather everyone to an evacuation point to be picked up by the Destiny's Bounty, which the only suitable evacuation point was the roof of the NTV office building. The citizens all head to the building while the Ninja hold off the Stone Warriors using the Ultra Sonic Raider and the Ultra Dragon.

Back on the Island of Darkness, Lord Garmadon finally reaches the top of the mountain, where he finds an enormous clock and the Helmet of Shadows. The Overlord tells Lord Garmadon to take the helmet, which will give him control over the Stone Army—as Garmadon does so, the hands of the clock begin moving. The Overlord explains that the clock is counting down to the final battle, and they will ensure that darkness finally overwhelms the light.

As the citizens go to the top of the building by the staircase, the Ninja continue to hold off the Stone Army. However, Misako realizes she dropped her valuable research scroll as she was going up, and goes back down to retrieve it. But the Bounty has to take off as the Stone Army started damaging the ship's boosters, and at the last minute, Master Wu jumps off the ship and goes to assist Misako. Misako notices her scroll tangled up in the wires of the long ceiling lights, and after seeing the Stone Army gaining on her she is forced to jump onto the wires and carefully climb down to her scroll. After retrieving it, she attempts to jump back onto the staircase railing to no avail, finding herself at risk of falling.

Master Wu rushes in to fend off the Stone Army, helping Misako up and rushing to another room. As they get cornered nearby a large open window, they both use Spinjitzu to defeat some Stone Warriors. Their Spinjitzu has no effect and seeing as there were too many Stone Warriors, they jump out of the building and unexpectedly land on the Bounty. The wind blows away the picture under Master Wu's hat, but Misako reminds him that the past is the past, but there is always the future.

At the Island of Darkness, Lord Garmadon wears the new helmet proudly, declaring that he is back.

The Helmet of Shadows on its perch.

Error: Cole without his shoulder pads 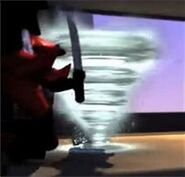 Add a photo to this gallery
Retrieved from "https://ninjago.fandom.com/wiki/The_Day_Ninjago_Stood_Still?oldid=377672"
Community content is available under CC-BY-SA unless otherwise noted.