Not to be confused with their real-life counterparts.

Alive
The Fold is a pop-rock band in Ninjago City.

The Fold were singing The Weekend Whip during the ninja's celebration after they defeated Garmadon.

While Cole was fighting the Giant Stone Warrior and Killow, The Fold were at Kryptarium Prison. 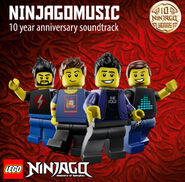 On the official cover of Ten for Ninjago