The Gilded Path is the fifth episode of the ninth season of LEGO Ninjago: Masters of Spinjitzu and the 89th overall. It was released in the United States on August 18, 2018 in "Hunted: Part 2."

The headquarters to the resistance is breached and Lloyd scrambles to avoid capture. Meanwhile, the Ninja are caught by Heavy Metal, but find an unlikely ally.

The Sons of Garmadon prepare to ambush the Resistance's base as Dareth, who had to pee behind some trash bags, sees them and tries to find a way to warn Lloyd and the others. As they were discussing plans, Dareth manages to get in and warn them, just in time as the Sons of Garmadon soon ambush them. As they fight them, the members manage to restrain some of the Elemental Masters while Nya soon has Lloyd taken into her armored vehicle along with Skylor and manage to escape as well as Dareth, who had to pee outside again. As they make their escape, the Colossus appears, controlled by Garmadon and steps on the tank. As it prepared to crush them, Lloyd telepathically asked his father to spare him. He reluctantly does so as P.I.X.A.L. soon appeared in her Samurai X mech in an attempt to distract him as the tank soon took off and Garmadon shoots the mech down. As Harumi watched Garmadon look on in sadness, Killow recovers P.I.X.A.L. from the mech's wreckage and detains her.

In the Realm of Oni and Dragons, Wu dreams about his time in childhood with his father and brother, and he recalled fishing with them. After both were frustrated at not catching anything, their father told them to have faith; Wu heeded his teachings and was able to catch a fish, to his brother's anger. Wu then awoke next to his students, who pointed out that he had rapidly aged into a teenager overnight. After he tells them of his dream, they pointed out his memories are returning and ask about anything else before Heavy Metal appears. Heavy Metal reveals to have overheard that Wu was the child of the First Spinjitzu Master, and after Wu confirms it, Heavy Metal reveals himself to be a woman named Faith who claims that she is on their side. She then asks if Wu knows the location of the Dragon Armor, to which Wu feigns the impression of knowing and tells his students to have faith in his plan.

Back in Ninjago, Lloyd and Nya, both now wearing clothing making them look like fishermen, watch TV from a distance as Gayle Gossip reports on the Resistance's arrest. Afterwards, Nya convinces Lloyd to burn his gi to prevent being seen and that inside of him was what made him the Green Ninja, which he reluctantly does so. Skylor and Dareth, also disguised as fishermen, came up to them with some food from supporters as Skylor tells Lloyd that the Resistance and his mother were likely sent to Kryptarium Prison. As Dareth watches some kids kick at a wrecked police car, he wonders if it's where they'll stay. Just then, the rat from before came up to them, causing Dareth to grab a mop, but the rat suddenly speaks and transforms, revealing itself to be Mistaké.

The Ninja haul the vehicle while Faith tells the tale of the First Spinjitzu Master. The First Spinjitzu Master and Firstbourne shared a connection and made the Dragon Armor. They made it their goal to unite the First Realm They failed, and the First Spinjitzu Master left the realm while the Firstbourne stayed behind to guard the armor. They notice Daddy No Legs and Muzzle approaching them. Faith has the Ninja "tied up" in chains while she wears her armor. However, Faith demands them to leave, and they prepare to do so, but when Muzzle discovers Wu looks older, Daddy No Legs becomes suspicious. Realizing the ruse was failing, Kai trips the two with the chain they were inadvertently standing on before the Ninja tie them up. They steal the Hunters' vehicles and continue their journey while their foes wonder on what to tell Baron.

The Sons of Garmadon sneaking up on The Resistance 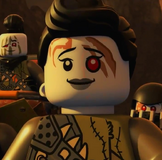 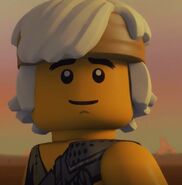 Wu aged into a teenager. 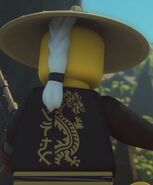 The Ninja and Wu, surprised by Heavy Metal's presence

Lloyd and Nya, disguised as fishermen
Add a photo to this gallery

Retrieved from "https://ninjago.fandom.com/wiki/The_Gilded_Path?oldid=358614"
Community content is available under CC-BY-SA unless otherwise noted.