Ninjago Wiki
Register
Don't have an account?
Sign In
Advertisement
in: Ninjago, Ninjago: Masters of Spinjitzu, 2021, The Island
English

View source
watch 02:56
Doctor Strange in The Multiverse o Madness - The Loop
Do you like this video?
Play Sound
“Whatever is on this island, it won't stop us from finding my mom and Master Wu.”
— Lloyd, "The Keepers of the Amulet"

The Island is a Ninjago mini-series, consisting of four episodes. It is preceded by Season 13 and succeeded by Season 14. It aired in March 2021, the same year as the series' 10th anniversary. Though Lloyd is the mascot character, there is no focus character. Ronin served as the main antagonist, and the Keepers and Ronin's criminal group serve as the villainous factions.

Teaser: An expedition led by Misako, Master Wu, and Clutch Powers has gone missing! With so much at stake, the ninja embark on a rescue mission to a mysterious and uncharted island full of surprises.[1]

Trailer: An expedition led by Misako, Master Wu, and Clutch Powers has gone missing! With so much at stake, the ninja embark on a rescue mission to a mysterious and uncharted island.

A piece of land which has never been mapped due to strange never-ending electrical storms. The ninja track down the only survivor and convince him to be their guide.

On board the Destiny’s Bounty, they head straight for the island! Prepared to enter a world of storms, monsters, doom, and much much more![2]

Our ninja heroes have returned to Ninjago City after their latest adventure. But there's no time to chill out because all sorts of mischief is going on in Ninjago City! Meanwhile, Master Wu and Misako are on an expedition with Clutch Powers. This season, our heroes turn from crime fighters into explorers, because the mysterious island is calling them![3]

Lloyd was the mascot ninja. The Storm Amulet serves as the collectible item of this installment. The set background was based on the shore of the Island of the Keepers.

The LEGO Group's official reaction to the passing of Kirby Morrow,[31] depicting Cole in his new Island suit 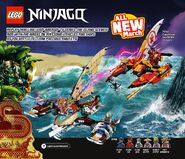 A LEGO catalogue outlining the sets 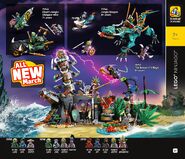 An image of the Keepers

Cole and Zane creating statues from Earth and Ice

Wu reading Boobytraps and How to Survive Them with Clutch Powers

Mammatus with his guards along with Lloyd on top of Zippy

Wu and Misako with a Stone Guardian

Kai playing video games when the chicken disturbs him

Jay eating the food from PoulErik

Twitchy Tim with the chicken and Lloyd